I picked Bloodshot and Hellbent (by Cherie Priest) up from my local library. 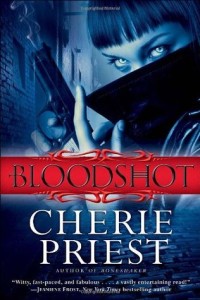 Description from Goodreads:
Raylene Pendle (AKA Cheshire Red), a vampire and world-renowned thief, doesn’t usually hang with her own kind. She’s too busy stealing priceless art and rare jewels. But when the infuriatingly charming Ian Stott asks for help, Raylene finds him impossible to resist—even though Ian doesn’t want precious artifacts. He wants her to retrieve missing government files—documents that deal with the secret biological experiments that left Ian blind. What Raylene doesn’t bargain for is a case that takes her from the wilds of Minneapolis to the mean streets of Atlanta. And with a psychotic, power-hungry scientist on her trail, a kick-ass drag queen on her side, and Men in Black popping up at the most inconvenient moments, the case proves to be one hell of a ride.

Review:
A fun, if shallow read. I enjoyed Raylene’s OCD self-identified craziness. I loved the drag queen side kick and I thoroughly enjoyed that the vampire love interests was a little broken and vulnerable—no alpha a-holes here.

It was a little on the predictable side and the writing was nothing extraordinary (though perfectly readable). Basically, the book was a fun fluffy vampire read. 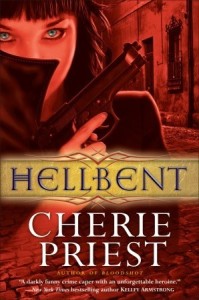 Description from Goodreads:
Vampire thief Raylene Pendle doesn’t need more complications in her life. Her Seattle home is already overrun by a band of misfits, including Ian Stott, a blind vampire, and Adrian deJesus, an ex-Navy SEAL/drag queen. But Raylene still can’t resist an old pal’s request: seek out and steal a bizarre set of artifacts. Also on the hunt is a brilliant but certifiably crazy sorceress determined to stomp anyone who gets in her way. But Raylene’s biggest problem is that the death of Ian’s vaunted patriarch appears to have made him the next target of some blood-sucking sociopaths.  Now Raylene must snatch up the potent relics, solve a murder, and keep Ian safe—all while fending off a psychotic sorceress. But at least she won’t be alone. A girl could do a lot worse for a partner than an ass-kicking drag queen—right?

Review:
Another fluffy, easy read. As in the first book, I liked Raylene’s OCDness and the way she was just so matter of fact about it. I liked her side kick. I liked her family-building, as well as the fact that romance is hinted at but never becomes part of the story. I also liked the writing and narrative style, which is surprising as it’s first person and I generally don’t like first person. I did think this one came across as a little juvenile. Mostly because Raylene was tasked with hunting down baculum, which requires 14 thousand references to penis bones and the likes. It because apparent that this was there for comic effect, but it also made me feel like a 15-year-old would have appreciated it more. Despite that, if there were a 3rd book I’d pick it up.