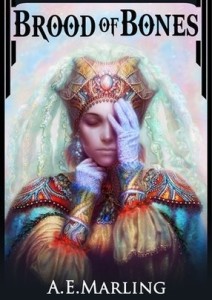 Brood of Bones, by A. E. Marling has been on my radar for a while, because the cover is so darned eye catching. So, when I saw it on the Amazon free list a while back I grabbed it. Perhaps it is permafree, as at the time of posting it was still/again free.

Description from Goodreads:
Cursed with endless drowsiness, Enchantress Hiresha sleeps more than she lives, no time to marry and raise a family. From virgin to grandmother, all the women in her city have conceived. A lurking sorcerer drains power from the unnatural pregnancies. The only person uncivilized enough to help is the Lord of the Feast, a dangerous yet charming illusionist.

Review:
A pleasant surprise in that it lived up to my expectations. Hiresha wasn’t a particularly relatable character, being painfully blunt, but I quite liked her. Maid Janny and the bodyguard (whose name I won’t even try to spell) were wonderful sidekicks. And the Lord of the Feast was an interesting maybe-ally/maybe-enemy/maybe-more character. I quite liked him and his quandary.

The world was engaging and, while not deeply described, there was enough detail to understand it. The writing was quite readable and there is some unexpected humour.

I was a bit confused about Hiresha’s age. It’s never clarified beyond nearing the end child bearing age (she wants children and is starting fear she’ll never be able to have them) and too old for someone who wants a sweet young thing to want to rape her. But I’m guessing mid-late 30s. Old enough to have reached provost level at the university.

Her age matters to me because I’m also wondering how she managed to essentially buy the town. She was born poor, chosen to become and enchantress, I assume makes a lot of money as one (but for how long) and donated a wall to the town. But everyone seems to know her and treat her like royalty and I was never entirely sure why, especially since she hadn’t been back in a dozen+ years.

The concept of wearing 27 dresses, even if enchanted to be light, also wore on me in it’s ridiculousness. (Ha, that pun wasn’t intended.) It was never suggested that this was somehow required of her position, so I never quite understood it. Using clothing to emphasise her position and bolster her self-esteem, sure but trap herself in a cage of cloth, why?

I also found all the references to moving the dresses and almost passing out from heat exhaustion repetitive. Plus, (personal pet peeve) she almost never took them off, even sleeping in them. Ummm, when did she bathe? Not once in the whole book. Did she have an enchantment for this?

I did think it dragged a little as the reader goes through each deductive step of the investigation with Hiresha. But I also appreciated seeing her utilise her intelligence to solve the mystery.

All-in-all, I had a few complaints, but it was an enjoyable read and I’m hoping to get my hands on the sequels.