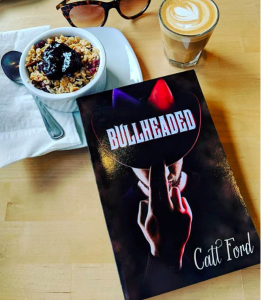 I bought a copy of Catt Ford‘s Bullheaded.

Description from Goodreads:
Aging bull rider Cody Grainger needs bullfighter Johnny Arrow for more than just protection in the ring. Their bond of trust goes beyond the professional and into love, but while their relationship holds up to the need for discretion imposed by their sport and repeatedly having to watch each other put themselves in the way of dangerous animals, other barriers still tear them apart.

For one thing, Cody is ten years older than Johnny. But instead of contemplating retirement, he focuses on winning the championship, desperate to stay on top. Johnny is only beginning to find the professional recognition he craves. When frustration leads Johnny to walk away, Cody’s season slumps. While they’re apart, they both slowly realize they are meant to be together. But machismo abounds in the sport of bull riding, and their pride might be an obstacle too big for love to overcome.

Review:
I was really looking forward to reading this. I went to my first real rodeo this summer and it made for the perfect backdrop for this book. For sure I could hear the announcer clear as day. However, despite that, the book wasn’t a winner for me. Starting on about page 30 I was just frustrated with it the whole time.

For one, there is just too much sex. I’m not a prude. I like a good sex scene or three. But this book just about literally has one every ten pages like clockwork. It’s a 320 page book! The sex definitely got in the way of the plot, cluttered up the narrative and just go old.

What’s more, a lot of that sex was actually when the two men were broken up. So, it’s not even meaningful sex. It’s fucking filler. Yes, the men were supposed to be learning life lessons because of it. But I didn’t need every rest-stop hookup and angry anonymous blow job to see this. What’s worse, it made Cody look like a total douche, the way he treated his partners. And trust me, Cody didn’t need to be made to look like more of an ass. He’s a large part of why I disliked the book.

Cody was arrogant, smug and cocky. Johnny left him for legitimate reasons, Cody (at 32) seemed too self-obsessed to understand why, and this never changed. Johnny, the more mature to start with showed growth, Cody did not. He just got his was as always and the author pretended it was a happy ending.

And here-in lies my bigger issue. Johnny left because Cody made everything about himself. He couldn’t separate what was good for himself from what was good for anyone else. Then, Johnny came back to Cody because Cody needed him. Making it all about Cody again and pretending there had been some growth that there hadn’t actually been. Johnny even said, “You’ve changed,” to Cody. But I saw no evidence of this. Cody never said or did anything that made me think he was any different than when the book started. Thus, I finished the book frustrated and angry.

I didn’t understand why Johnny was with Cody to start with. They had no relationship outside of explosive sex and they were supposed to have been together for two years. Two years and Cody is such an narcissist he literally never asked Johnny Arrow what his real name is, his coming out story, what his tattoo means, etc.

All in all, this was not a fun read for me. I finished it through force of will and nostalgia from see my first rodeo in…..Cody, Wyoming.