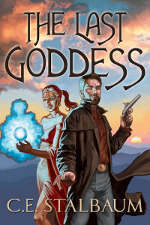 I grabbed C.E. Stalbaum‘s The Last Goddess (The Shattered Messiah Trilogy, #1) from the Amazon KDP list.

Description from Goodreads:
When a man discovers the body of the long-lost Messiah, he fears her very presence might incite a holy war. When she wakes up, he is certain of it…

Nathan Rook never had much use for faith. As a soldier in the last war, he witnessed first-hand the devastation wrought by the ageless religious schism so deeply dividing his country. But when he discovers an ancient coffin and finds a living, breathing woman inside, he believes he may have stumbled across the greatest discovery in history – or the greatest hoax. From her ceremonial dress to her elaborate tattoos, the mysterious woman is the perfect incarnation of the Messiah, and she wields a power that defies the very laws of magic. There’s just one problem: she doesn’t remember anything, not even her own name.

As he strives to restore her memory, Rook realizes it might not matter if she is the genuine Messiah or not. Once word of her discovery gets out, every faction in the city will seek to claim her legendary power as their own. Together they struggle to evade a mad prince, a renegade general, and a power-hungry senator, but he has yet to confront the biggest problem of all: he is falling in love with her.

Review:
Accurate or not, let me tell you what I expected from this book after reading the description. I thought it would be something like a steampunk version of The Fifth Element. You see Selaste would be Leeloo, Rook would be Korben Dallas, and there is even a arcane priesthood whose representatives could have been Vito Cornelius and his apprentice. Ok, so I was a bit off the mark. There is more going on here than in my favourite absurdist Space Opera. For one thing there is a lot of political intrigue. Understanding the numerous religious/political factions at play is imperative to following the storyline. That makes the beginning of the book a little slow. There are a lot of terms and descriptions to get through. But once the story is able to get rolling it is quite interesting.

I’ll also tell you what my favourite aspect of it was. With a few notable exceptions almost none of the characters are solely black or while or strictly good or evil. There is some serious moral ambiguity here. For example, it’s difficult to decide who is really in the wrong between a mother/empress who is sacrificing the happiness someone else by forcing her daughter into an unpleasant arranged marriage that essentially whores her out for the good of the nation, or the daughter who refuses to tolerate the unpleasantness of said marriage in order to save the lives of tens of thousands of people. Both are wrong, but sadly both have seeds right in them too. Or how about the military general who is an unquestionable war monger, but also a staunchly loyal and religious man who thinks he is doing the best thing for the people, avoids involving civilians and never kills more than is necessary to win the battles. I think these grey characters are a real mark of the mature writer Stalbaum must be.

All of the main characters, or rather main good guys, are a lot of fun. The banter between them is endless and often really funny. There are also a lot of really good quotables in this book. I highlighted more than a few passages, some because they are astute and some just because they are funny. Here are a few example:

In my experience, things rarely work out exactly the way you expect them to,” Rook warned gravely. “If they do, it usually means something is wrong.

The ability to destroy is a poor measure of power in the end.

You’ll never impress a lady with a claymore. They want to see skill, not a blade that’s bigger than they are.’” He grunted and lowered the sword. “I suddenly wonder if that was a metaphor for something else…

Fighting off a garrison of royal guardsmen,” Van muttered. “How depressing is it that this isn’t even in the top three crazy things we’ve done this week?

Now, I did think that there was a fairly severe kink in the timeline. I realise, of course, that this was misdirection on the part of the author rather than an actual breach in consistency. But my brain had a really hard time catching up on the reveal. The flip side of that same statement is that I obviously didn’t see that particular twist coming. I liked that. All in all I enjoyed the book. There is a lot of action, some fun characters, and more depth than I expected.