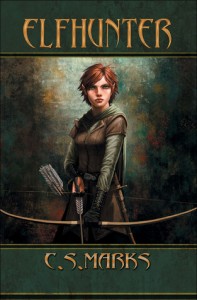 A representative of C.S. Marks sent me a copy of Elfhunter (Tales of Alterra, The World That Is #1) for review.

Description from Goodreads:
This is the tale of Gorgon Elfhunter, a monstrous, mysterious creature who has sworn to destroy all the Elves of Alterra—until none remain. It is the story of Wood-elven heroine Gaelen Taldin, who has sworn to rid her world of the Elfhunter even as she is hunted by him. The conflict between them creates a tangled web that blurs the line between Light and Darkness, love and obsession, free will and fate. Filled with moments both tender and terrifying, thrilling yet thought-provoking, it is a timeless epic fantasy suitable for readers of all ages. Join the Company of Elves, dwarves, mortal men, and delightfully intelligent horses. Come to Alterra—the “World that Is”.

Review:
Elfhunter will likely appeal to most Tolkien fans. It would be almost impossible to miss the similarities between the two. I read Tolkien when I was younger and I loved his writing, his stories, and the way he could just reach in and snatch the breath from my chest with the seemingly simplest of prose. I enjoyed Marks’ writing, but it’s not Tolkien.

I have to be honest. There is a small part of me who whats to lay my head back, close my eyes, and just relish the fact that I finally finished this book. I would have gotten far more enjoyment out of it if it had ended 200 pages before it did. Now, that isn’t to say that I didn’t like the book. For the most part I did. There are some really fine characters here and a truly epic journey against a notable foe. I just thought that it was way too long. There are whole passages dedicated to what the horses are doing, for example. I’ll grant you that they are very charismatic and anthropomorphised horses, but I just don’t care what the horses are doing when their people/elves aren’t on them. I just don’t. Everything from clothing, to environs, to emotions is described in excruciating detail. The result is that the book moves at an agonisingly slow pace. Patience is a must for this one.

On the flip side of all of that detail is the fact that Marks in able to create a very detailed world. The elves, humans (who aren’t called humans BTW) and dwarfs all have fairly established societies. Granted, none of these venture far from the pre-established fantasy tropes. The elves are tall and graceful. They sing marvellously and live forever. The dwarfs are short and squat, grow beards, carry axes and tend toward mining and forging. The men are rough horsemen of noble heart. Nothing new in any of that. But Marks does a very good job of bring these societies to life.

I did struggle with the writing style a little bit. There isn’t anything ostensibly wrong with it, but I saw another reader refer to it as ‘uncomfortable.’ I know exactly what he meant. I wouldn’t have used that particular adjective, but the writing is stiff, almost formal. There are a lot of ‘he did this, for she had…” type of sentences. To a certain extent this fits the story. If focuses on elves,who are known to be aristocratic and, well, formal. But 500 pages later I really, really wanted to be able to relax with these characters and their language was prohibitive. Kind of like sitting down to tea with some prim English gentleman and then slurping the dregs of your soda through your straw–just not done. It grated on me eventually. I will concede that it was consistent and well edited though.

Most infuriating of all, however, is that after 500+ pages it ended with a ‘Meh.’ I needed a sweeping, grand finale to make it worth all the time invested. Instead there is the emotional equivalent of  ‘oh well, better luck next time.’ It is definitely not a satisfying ending. I realise, of course, that this is the first in a series, so in a way it isn’t the end. But still…

All in all I’m of two minds here. I did enjoy the story. I could pick it to death, sure. There are plenty of small things bothering me. Like the annoying way things kept creeping up from the elves long histories. Things like: ‘Oh yea, BTW she’s had her true love already. Didn’t you know?’ The youngest is over 1,000 years old so there is a lot of uncovered life that popped up from time to time. I never felt like I really knew them. But that’s a small matter. I can over look it and other small grievances enough to say with some certainty I enjoyed the story. On the other hand, I found finishing it a chore and it would be dishonest to say otherwise. I think this is a strong case of finding the right reader for the right book.

On a side note, of no real importance to  anyone: I MUCH prefer the new cover (above) to the old one (right). In the new one she looks like a strong, aggressive 1,000 year old elf that no-one with half a mind would mess with. In this old one she looks like a frightened child. The two convey completely different messages and the new one is a vast improvement, as well as a more accurate portrayal of the character. I’m just sayin’.

As I was reading Elfhunter I noticed The Fire King on the KDP list and grabbed it. It is a novella based in the same world as the novel.

Description from Goodreads:
From the creator of the beloved ELFHUNTER Series comes a tale of fate and faith, of the perils of pride, and of the power of love itself — as a King is forced to confront that which he has long denied–that which is in us all. The Shadow has come to Alterra: a force of such power and terror that none may stand against it. It has but one purpose: to lure Aincor to his doom.

Review:
The legend of Aincor was referenced more than once in Elfhunter and it was really interesting getting to read his story. I also really appreciated the little bit of history provided. I would almost suggest readers start here with The Fire King for just that reason.

I’m not a huge fan of novellas. They’re just glorified short stories as far as I’m concerned. I know that might be a little condescending considering I just complained about Elfhunter being too long, but there is just so little time for character development and I felt it here. The narration is almost entirely in the fashion of a storyteller. I.E. the reader is told what happens, what is felt, what is said and very little is experienced first hand.  This did enable Marks to relay a lot of information in a short word count, but there is a reason such narrative styles are largely reserved for spoken tales. I knew, because I had been informed, that the king was prideful, etc but I had no sense of him as a man.

Be that as it may, it’s a fun little read and worth picking up. I enjoyed Aincor’s story. If you like the type of legends one might hear told around the campfire this is the book for you. It was really quite predictable. Between the tidbits given in the previous book and the basic set up of the plot it isn’t hard to figure out what will happen. But I’ve found that sometimes knowing where a story is going lets you feel a little closer to it.