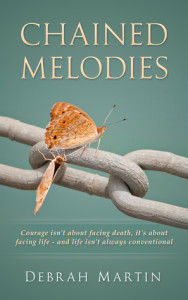 Author, Debrah Martin sent me a copy of Chained Melodies for review.

Description from Goodreads:
“Chaos is about rejecting all that you have learnt, chaos is about being yourself.” Emile M. Cioran

If chaos theory applied to anyone, it’s Will and Tom. Best friends since childhood, life takes very different courses for them until they’re thrown back together in the middle of their own individual chaos. Surviving the terrors of war in Northern Ireland and the heartbreak of childlessness and a broken marriage, Tom learns that bravery isn’t about daring death, it’s about facing life. For Will, it’s about being yourself – or in his case, herself, as he starts an unusual journey towards being just that; the woman, Billie.

Review:
Spoiler Alert: I’m not planning to give anything significant away, but I do plan to discuss the ending.

I have some real mixed feelings on this one, because some aspects of it I really loved and others not so much. Before I get to any of that, let me just say the writing here is marvelous and the late 70s-through 80s was a wonderful setting. My only real complaint, writing-wise, is that Will/Billie’s journaling didn’t really work for much of the book. His/her* POV is provided in the format of a diary, and it works in the beginning. But as the book progresses his entries become longer and more narrative-like, until eventually they no longer read like diary entries at all. The language is too florid, the descriptions too rich, the details too frequent to be a believable diary entry. It was a pleasure to read if you ignored the fact that it was supposed to be what it was supposed to be.

I did have some trouble believing Will’s transsexualism. And I don’t think I should have. The author’s research was apparent…a little too apparent at times. Some of his experiences were just a little too textbook. But mostly my trouble arose because his self-exploration took the form of some kind of soft focus, bemused curiosity. There was no anger, shame, disgust or bad feelings about himself or his body at all. Not to suggest all transgendered individuals must feel this way, but every real-world account I’ve come across or interview series or personal account, etc all heavily accentuate this as part of recognizing they are not residing in the correct body. Will just sort of floats along wondering if he’s gay or not and then suddenly meets a transsexual and decides that’s what he is. I couldn’t buy it.

I understand that up until a certain point he can only consider himself in ways he has a perspective for, and sexuality was something his worldview presented as possible for exploration and gender was not. I understood that, but I never sensed he had any real issue with his body, until suddenly he did. It all felt kind of sanitized.

This was all exasperated a little bit by the fact that he’s described as being so obviously feminine. This is emphasized to such a degree that I felt that having a feminine appearance was integral to being transgendered, as if he couldn’t have been if he was 6′ 2″, 200lbs and balding. Don’t get me wrong, I really liked him as a character and I was willing to accept what I was being told, but I had to make a conscious decision to do so.

Tom, however, Tom I bought completely. I really enjoyed his oblique self-revelations. I liked that he tried so darned hard to be a good man and failed over and over again. I loved his self-reproach and cowardice. He was a shit (and I’m pretty sure that’d be the word he used to describe himself), but he was a shit who was trying to learn to be a better man. But this is part of why I had trouble with the events involving his ex-wife that led to the ending. It’s not that I don’t think he would do it in some circumstance, but I thought that bridge had been burned a little too thoroughly for a man trying to break free to cross again. Especially since the ex-wife was such the cliché manipulative harpy.

Actually, I had a lot of trouble with the end. I have to just come out and ask, what is with all the unnecessary tragedy? I mean, it’s the story the author wanted to tell, so it’s not pointless per se, but a very real part of me wants to ask why non-cisgendered/heterosexual characters almost never just get an unmitigated happy ending. It’s like they’re the Red Shirts of the romance realm. Why do they have to suffer (be punished) before being given a little scrap of happiness they are expected to be thankful for, even in books like this one, that I’m confident was written in support of such characters?

I did really appreciate how richly the characters lives were depicted and how visceral the time period was shown to be. People have real problems—mental illness, abuse, neglectful parents, alcoholism, hopelessness, illness, infertility. And I liked that these are realistic blue collar people. Tom joins the army then works in a factory. Nothing glamorous in that, but it’s real-life for so many people.

All in all, I had a few rather major complaints about the book (or certain aspects of it), but I generally really liked it. I liked Will/Billie and Tom. I liked their slow realizations. I liked the depth of writing and the patience with which the plot progresses. I think the book is well worth picking up.

*I use both pronouns here, instead of just the feminine, because for much of the book Will is unaware of his gender dysmorphia and Will and Billie are almost presented as separate characters. To ignore Will (him/he) would leave out an integral part of the story.