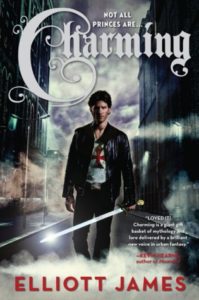 I borrowed Charming, By Elliott James, from my local library.

He comes from a line of Charmings — an illustrious family of dragon slayers, witch-finders and killers dating back to before the fall of Rome. Trained by a modern day version of the Knights Templar, monster hunters who have updated their methods from chainmail and crossbows to kevlar and shotguns, he was one of the best. That is — until he became the abomination the Knights were sworn to hunt.

That was a lifetime ago. Now, he tends bar under an assumed name in rural Virginia and leads a peaceful, quiet life. One that shouldn’t change just because a vampire and a blonde walked into his bar… Right?

Review:
Not bad, it was amusing. John had lots of witty comments that made me laugh. I was really impressed with how well thought out the magic system was and I liked the characters (especially the side characters). So, I’m not sad to have spent the time to read the book. But I also had problems with it.

My main one [this may be a spoiler, but it’s so predicable I don’t consider it so] is that with all the available enemies—new vampire queens, three different knight-like orders, werewolves, nagas, etc—and all the threats they could pose, the primary challenge here basically came down to who owns the right to a particular woman’s sex.

I use the word cliché in my reviews a lot. It’s one of my strongest insults to hurl at a book. And come on, a man willing to kill rather than loose “his woman” is just about as over-used and clichéd as they get. I love that Sig was a large framed, strong woman, still considered beautiful and didn’t wallow in her own body image issues. But she was still made weak in regard to relationships and good ol’ toxic patriarchy was wheeled out with thoughtless ease by the author. *sigh* And it doesn’t even look to be over, since I smell the whiff of a love triangle in future books. So we can keep arguing over who gets have access to Sig.

On a slightly similar note, i.e. dismissing women, John’s motley crew that this series is based on…yeah, it’s SIG’S crew. But you know, a man came on the scene so we need to shift our focus, right?

Anyhow, outside of those complaints I liked the book. I didn’t really feel the threat of the vampires or the knights hunting John. They were all just kind of in the background, never really creating any significant threat. John would occasionally attack them and have a pretty good fight scene, but then he could safely go home and the tension would drain away. But John had a fun narrative style, wasn’t and alpha A-hole. The side characters were fun and Sig was a woman I appreciated.