I’ve got something a little different today. Michael Van Cleve, the author of the comic book Child of the Sun (along with illustrators  Renee Reeser, Jon Bass and Adam Rosenlund ) sent me the first two volumes for review. I went into this with such high hopes. 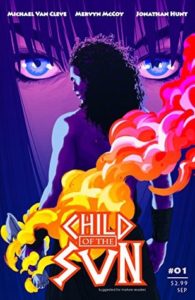 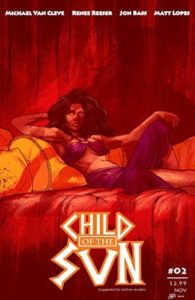 Description from Goodreads:
Child of the Sun is a very loose adaptation of the biblical Samson mixed with some other biblical tales, biblical legends, and ancient biblical fiction. The story focuses on the first half of Samson’s life: before Delilah, before the fall, when his power and confidence was at its height. It is also a love story between Samson and the little known wife of his youth.

Review:
I’m going to start by saying the art is pretty good. There are some flashy color panels and I like the illustrations in general. But much of my praise ends there. Largely because I’m obviously not the target audience.

I totally get that comics are traditionally a boys club. And I completely understand that it’s based on Biblical and mythological tales that are very androcentric in general. But nothing in that disallows the author & illustrators from breaking out of the well-worn and ill-thought females are nothing more than walking fleshlites or inconveniences to ‘bog’ a man down rut and including even one that wasn’t just there to be oogled or ‘taken.’ Outside of the focus on hard drinking and whoring there is basically only graphic violence here.

Again, I get it, comics ‘are for boys’ and I guess you write/draw for your market, right?  I have to question what inspired anyone to send this particular comic to a female reader, a fairly vocal feminist reviewer at that. Because as a woman, there was NOTHING in this to appeal to me. I don’t think there was meant to be, unless someone really missed their mark. In fact, it pretty much just pissed me off. The second even worse than the first, as it’s just basically borderline porn involving a truly miserable woman, a gang rape, an attempted rape and a carousal whore house.

So, if you’re a 16-year-old boy who revels in imagining that the paragon of manliness is puffed up, muscle bound, hard drinking, violence and ancient Greek era sex-bots go ahead and buy this. If you’re a girl, or God forbid the parent of a girl, run away. Quickly. Because, being as this is based on Hercules and Sampson (and we all know what happened to Sampson when he trusted a woman) I can only imagine the  denigration and villainization of women is going to get worse. Maybe I’m wrong. I hope I’m wrong. But I’m not sticking around to find out.