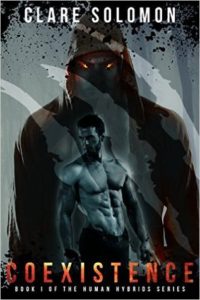 Clare Solomon sent me a copy of her novel Coexistence for review. There is also a prequel available on her website and a second book available if you sign up for her newsletter.

Description from Goodreads:
Scientists have genetically engineered five human hybrid races known as werewolves, vampires, dragons, sensers and wendigoes. The first four races coexist with humans in relative peace. The fifth one wants to butcher the others and they are getting stronger.

Jaspal ‘Pal’ Khatri is nearly killed and forced to leave his home with a werewolf pack in Oxford, England when the local HyCO group leads a mob of anti-hybrid rioters against them. He travels to the Highlands of Scotland for a fresh start and meets Brand, a werewolf still grieving after the murder of his lover, Kye, a year ago. He and Brand find a dead vampire and Pal is suddenly in the nightmare situation of being accused of the murder. There is a link between this death and that of Kye and Brand works for another branch of HyCO so, to prove his innocence, Pal must join the organisation he loathes and try to ignore his growing feelings for Brand as they work to uncover the real killer. Can they solve the case in time or will they become the murderer’s next victims?

Review:
Umm, no, this did not work for me. It’s too long, provides the same information over and over again, is far too heavy on the tell vs. show, has a ‘love’ that is rejected for ridiculous reasons and then has a sudden and unbelievable turnaround, a mystery that is solved with far too much ease and a second that drags on eternally, a doctor that never doctors and a world with five types of humans that isn’t really explored beyond wendigos bad everyone else good.

Solomon has a good idea here and I liked the characters. The book even starts out really well. But in the end the writing, editing, pacing and plotting wore me down and I was just glad to finally finish it.