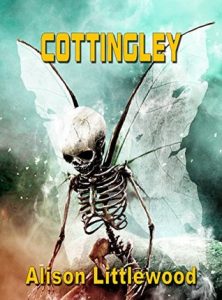 I won a copy of Alison Littlewood‘s Cottingley

Description from Goodreads:
In 1917 the world was rocked by claims that two young girls – Elsie Wright and Frances Griffiths – had photographed fairies in the sleepy village of Cottingley. In 2017, a century later, we finally discover the true nature of these fey creatures. Correspondence has come to light that contains a harrowing account, written by village resident Lawrence Fairclough, laying bare the fairies’ sinister malevolence and spiteful intent.

Review:
This book is written entirely in letters, which is not a style that I enjoy. And while this didn’t change my opinion on the writing device, I have to admit it was exceptionally well done. Especially considering it’s not only letters, but only one side of a correspondence. Still, Littlewood managed to create a followable plot that didn’t feel forced. The language is appropriate for the time period and the formality right for letters between two people who have never met. Really, I’m shocked to have liked it as much as I did.