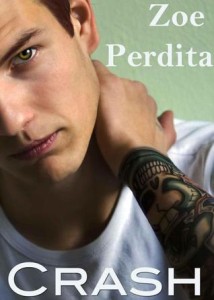 I picked up a copy of Crash, by Zoe Perdita, from the Amazon free list.

Description from Goodreads:
Ben Singer, an omega werewolf, has been in love with his former best friend and the alpha scion of their wolf pack, Axel, from the time they were teenagers. Ben thought they were mates, but the rules of their pack kept them apart.

Axel Cross is a fuck-up. The sexy tattooed wolf threw away his chances of ever becoming pack alpha at seventeen, and Ben has no idea why.

When Axel’s uncle kicks Ben out of their Pittsburgh pack, it’s the chance the omega has been waiting for. Then Axel demands to accompany the smaller wolf. The only problem is Ben wants to run away for good – away from the pack Axel’s uncle decided the omega should join and away from Axel.

But Axel doesn’t take ‘no’ for an answer. He’s determined to go with Ben, even if the omega doesn’t want him around.

While desire stirs between Axel and Ben, years of heartache haunt them. Can the alpha and omega let go of their past and the old pack in order to find a bright new future together?

Review:
I basically enjoyed this book. I thought Axel was an interesting character and liked Ben well enough. I was disappointed to find such a strong representation of the common hetero romance “Damsel In Distress” trope. I can’t even begin to estimate how many of those het romances feature a tough hero who hurts the woman he loves by forcing distance between them for her own good, without giving her a reason. Only to then protect her secretly from a distance and then return and claim her when he’s ready, expecting all past slights to be instantly forgiven. This is a very common trope in het romance and I wasn’t thrilled to find in it my MM, because one of the primary reasons I read MM (other than it’s just sexy) is to get away from these same heavily gendered versions of male-female relationships. (And there is no question here of which man represents the ‘woman’ and which the ‘man.’) Despite that, I did enjoy seeing how Axel struggled with the reality of his decisions.

While I quite liked Axel, asshole alpha as he was sometimes, Ben didn’t light my fire. I found him to be an overly stereotypical queer kid and his constant mouth got on my nerves. Yes, I got that was part of his personality, but he mouths off relentlessly to people he was otherwise terrified of. (Really, that’s not how terror usually works.) And he does so knowing it’s Axel who will be punished. He loves the guy, you’d think he’d be invested in not getting him punished. Similarly, as adults I found his constant sexual innuendo exhausting. Again, I get it, he does it as a means of deflection and self-protection, but I got so tired of reading it.

I found the writing fine, with the exception of the constant ‘taller wolf, ‘smaller wolf,’ ‘Omega,’ ‘Alpha/Alpha Scion’ (the author wasn’t consistent in which was used, which was problematic as I believe, per world-set up, he was an Alpha Scion but with no pack to lead, not yet and Alpha). I really did need an explanation on pack hierarchy and politics though. I understand alpha/top dog, omega/bottom dog. But there is no explanation of what makes an omega an omega. I assumed Axel was an alpha scion by virtue of being the Alpha’s son. But Ben’s parent’s were mid-level pack members, not omegas and Ben was labelled as such even as a small child. So it can’t be family position and isn’t necessarily just his smaller size or personality (as it wouldn’t have developed yet). In the same vein, Axel’s need to prove himself worthy before taking over the pack (and thus throwing that chance away) doesn’t make a lot of sense considering the two previous alphas. Neither of them would qualify as worthy.

Anyhow, I had complaints, yes. But if I came across the sequel I’d be more than happy to read it. I enjoyed more than I didn’t.