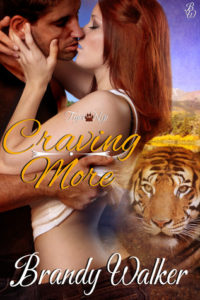 I picked up a copy of Craving More, by Brady Walker, from Amazon when it was free.

Description from Goodreads:
Corrine Hart is ready for few days off for rest and relaxation. At the top of her to-do list is spending as much time as possible in tiger form and doing her best to banish all thoughts of the mysterious Hunky Cupcake Guy who spent the last two weeks driving her libido insane.

Jett Montgomery-Murphy just wants to know if the tasty treats that keep showing up at work are the same ones his best friend used to get while they were in college. A trip out to Sweet Confections confirms what he thought and brings him in close contact with the one woman he’s secretly lusted after for years, his best friend’s sister Corrine.

A late night tryst leads to two tigers finding their mates and two humans unsure what to do next. Add in an overbearing brother, a best friend with her own drama, and a crazy ex-girlfriend that has a checkered past and you have a recipe for disaster.

Will Corrine and Jett be able to overcome the unexpected obstacles on their way to falling in love? Or will they throw in the towel before the relationship even gets off the ground?

Review:
I won’t lie; I read this book because I was sick of looking at the ugly cover in my TBR list. He looks like some duck-billed Cro-Magnon in that picture. Yuck. But I held out hope that the story might be ok. It wasn’t, not in my opinion anyway.

I thought the hero was a wimpy ass and every other male in the book was condescending and patronizing toward women. The women fell into only two camps. Good girls who were the potential mates of the male characters or crazy, violent bitches not worth consideration or humanity. There was no significant plot. Random things just happened. The world, despite seeming interesting, wasn’t developed enough for me to feel invested in. The characters lacked depth and I was basically bored for most of the book.