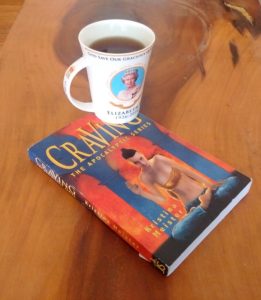 I won a copy of the second book in Kristina Meister‘s Apocalyptic series, The One We Feed. So I ended up buying the first one, Craving. It took a year, mind you, to convince myself to spend my meager book budget on it. But I got to it eventually.

Description from Goodreads:
When Lilith Pierce’s younger sister commits suicide, Lilith consoles herself with cleaning up Eva’s final mess. But when she returns to the coroner’s office to collect the body, she finds that the last few days were all a bizarre waking dream that never actually happened.

Aided by the detective who witnesses her brush with the paranormal, she tears apart her sister’s shadowy new life. Yet after reading hundreds of Eva’s detailed journals Lilith still has no explanation and no suicide note. Her search becomes a maddening obsession uncovering tantalizing questions but no answers…until she meets a stranger at her sister’s funeral.

Drawn to the mysterious man in a way she cannot explain, Lilith seeks the help of his crew of equally bizarre friends, including an immortal, blue-haired hacker and a Desert Storm veteran. As her prophetic visions intensify and she begins to develop even stranger powers, she uncovers a culture woven into the fabric of history-a culture founded on an idea of peace gone horribly wrong.

From philosophy, to faith, to freakish genetic mutation, man’s deepest desires became his greatest flaws, turning all those who succumb into vicious monsters.

And very soon, Lilith will become one of them.

Review:
You know, when you read reviews of vampire book you often hear comments about the book being a new take on the myth. This one really is though. I’ve read hundreds of vampire books and never come across one that takes the origins of vamparisim in this direction. Granted, this isn’t just about vampires. In fact, they’re a small portion of the story. But it’s still fun to find something new.

The main character, Lilith, is not an immediately likable character. She has been a shite sister for one thing and doesn’t seem to grieve well. But she’s also an incredibly unreliable narrator. It just takes a little while to realize this. As the book progresses she becomes more likable, relatable and forgivable. All the other main characters, lets just call them good guys, are wonderful. I adored them all.

I also really liked that the Arhat seemed to be basically asexual by choice or inclination, not inability, but there was still recognizable love of various forms obvious between the characters. The fact that Lilith was 35 and Matthew even older was something to appreciate too. Sometimes I feel like characters over 27 never get to be heros.

Unfortunately, the book does suffer a little bit from too-perfect heroine syndrome. Lilith developed new abilities at an astounding rate and always just when she needed them. They felt very deus ex machina (several times). It also tended toward lecturing. All the philosophical discussions slowed the pacing down quite a bit. Even with all those philosophical explanations, I felt like the actual mechanics of the ‘change’ were left very vague. As a result it felt very…well, woo-woo—even occurring over the phone at one point. Lastly, there is a notable repetition of the word askance. It’s one of those words that stands out, especially when seen several times (sometimes as a noun, which I’m not sure it can be).

All in all, a fun ride and I’m looking forward to reading book 2.