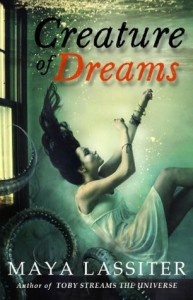 I downloaded a copy of Creature of Dreams, by Maya Lassiter, from the Amazon free list.

Description from Goodreads:
Travel photographer, Liv Hannity, forty-one, returns to her Southern hometown on a quest to find her long lost sleep. An insomniac and a lucid dreamer, Liv is used to waking nightmares–but they’re getting worse. Parasites have infested Liv’s dreams and are eating her alive. Seriously. Or, so says Grim, Liv’s childhood dream-character playmate and a self-professed demi-god of dreams. (Or maybe he’s lying. Grim loves a good lie.)

By day, Liv must sort through her difficult past, her overbearing family, her pushy best-friend, and Liv’s new, much-too-young, boyfriend, Milo. By night, Liv battles the Creeps, with Grim’s questionable help, as well as herself–because Liv might be the biggest dream monster of all.

Creature of Dreams is a funny, scary, roller-coaster about love, friendship, getting older, facing the monsters, and waking up. As well as growing up. Finally. (Maybe.)

Review:
Wow, I really liked this…a lot…and I almost didn’t read it. You learn early on that the main character, Liv, was a victim of childhood sexual abuse. I almost put the book down right then. Not because I have any trigger issues (10 years as a Child Abuse & Neglect Investigator, I’m a bit inured on that point), but because I’ve become increasingly frustrated over the last few years about how many female characters are written with a history of sexual victimisation. (I’d almost estimate it to be along the line of 2/3 the female Romance leads I’ve encounter recently.)

The problem is that it’s often only there as basic titillation, to give a male character something to heal or as a past traumatic enough to harden the character and strengthen her (often through anger). And this just pisses me off, especially that last point. As if a woman can’t just be naturally resilient. Male characters don’t have to survive some horrible trauma to become emotionally tough, why do all female characters? Gah, pisses me off. So, as a hot point issue for me, I almost just didn’t bother with the book. I’m so glad I did.

The history of childhood rape is pretty much the fulcrum on which the plot pivots. So, there is no escaping it. To be honest, I did begin to feel that, considering this is a 29-year-old trauma, Liv was a little overly focused on it. But she has come to a point in her life that she’s made a conscious decision to face her past, so dealing with it is kind of the point.

I basically tolerated that aspect of the plot, while falling in love with the characters…all of them. I cannot express how much I appreciated seeing a 41-year-old woman presented as single, without children, confident (with the exception of the issues being addressed), sexy and sexual. She was none of the things Western Culture says women ‘past their prime’ should be and I wanted to hoop and holler for her.

Then there was Pippa. Pippa, who cheerfully said all of my secret shameful thoughts on motherhood as if they were common and normal. As if the blessed ‘Myth of Motherhood’ really could be eked around without diminishing a woman. I need a Pippa in my life.

Milo…sweet, gentle, broken Milo. I don’t think it would be possible to not love Milo. And I could easily relate to his guilt and secondary trauma from witnessing atrocities. (I’m going to call it PTSD and Survivor Guilt.) Similarly, if Milo is a balm to the senses, Grim is the quintessential bad boy (even if there is nothing boy-like about him.) I enjoyed them both very much.

Books involving dreams can easily slip into too-weird-to-read territory and I’m always a little wary of picking one up, but after a rocky start, this was a complete success for me.