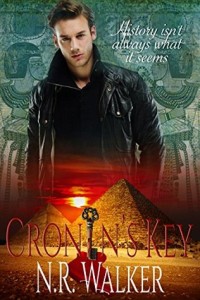 Description from Goodreads:
NYPD Detective Alec MacAidan has always been good with weird. After all, his life has been a string of the unexplainable. But when an injured man gives him cryptic clues, then turns to dust in front of him, Alec’s view on weird is changed forever.

Cronin, a vampire Elder, has spent the last thousand years waiting for Alec. He’d been told his fated one would be a man wielding a shield, but he didn’t expect him to be human, and he certainly didn’t expect that shield to be a police badge.

Both men, strong-willed and stubborn, are still learning how to cope with the push and pull of being fated, when fate throws them another curveball.

Rumors have spread quickly of turmoil in Egypt. Covens are fleeing with news of a vampire who has a talent like no other, hell-bent on unleashing the wrath of Death.

Alec and Cronin are thrown into a world of weird Alec cannot imagine. What he learned in school of ancient pharaohs and Egyptian gods was far from the truth. Instead, he finds out firsthand that history isn’t always what it seems.

A lot of people love this book and I can see that if you’re one of those readers who like watching Gary Stus moon over each-other and constantly vocalize how in love and in awe they are of one another, you would. I am not one of those readers. In fact, I’m one of those people who will put up with a couple, “You are my heart” comments, maybe even a couple “You are amazing” ones when the person has basically done nothing of consequence. But 300+ pages of it makes me nauseous. And that’s what this book is…mostly.

The first 30% is one solid info dump. You could maybe break it into several smaller info dumps, but basically nothing beyond info dumping happens. Then, the next 50% of the book is just people talking, cracking jokes (that fell flat for me), trying unsuccessfully to flirt, and being in awe of one another. The last 30% does have a little action in it, but it left me lost.

For one, the whole plot is that a crazy vampire is created with the ability to bring back embalmed vampires and she does, creating an army. She’s the only one who has ever been able to. No one has even ever heard of the skill. BUT how do you suppose Alec saves the day? He brings an embalmed vampire back to life. Um…how does that work?

Further, we’re told that part of what makes Cronin so dangerous is that he can just jump (transport) in anywhere and stake you before you know he’s there. He did it to a hundred or so vampires on his way to the bad guy. So…why didn’t he just do that to the villain? Further still, that villain is depicted as shocked when they arrive in her chambers. Why? Surely she knows some vampires can leap. So, why would she never consider the possibility of anyone doing so? And why do Alec, Cronin and crew bother fighting through hundreds of undead when they can just leap in? So. Many. Plot. Holes.

That villain was a ridiculous cardboard cutout. We’re told about her but she’s never given any depth. She manages to raise a whole undead army, but doesn’t apparently have the brains of a freakin’ fruit fly. Plus, she’s crazy and evil because she suffered a sexual assault that was never investigated. Really, women are so fragile they’ll condemn the whole world to slaughter to avenge two men? It’s such a cheap attempt at character development (and trust me when I say it was the ONLY one).

Worst of all is that, while I know Alec is said to be fine with the weird, because weird things have always happened to him, his blasé reaction to everything was more than my credulity could bear. I simply couldn’t suspend my disbelief that far. Same with his father; he just accepted everything, no biggy. (Plus, he was basically a useless character. He contributed nothing to the plot.)

Then there is the writing itself. It was passable and there weren’t too many typos, but it uses terms like “good vampire” and “bad vampire” seriously and that is just soooo cheesy. Plus, names, titles and endearments were occasionally used too often to be natural sounding.

So, if you’re into vanilla vampires and Gary Stu love affairs you’ll probably enjoy this book. If you’re looking for action or mystery or romantic development, this is not the book for you (or me).

Edit: I’ve decided to add links when I get flack about my reviews. I usually have a pretty thick skin for this sort of thing. But this comment is actually from an author who I own several of her books and I’m now reluctant to read them. I mean, if she is this reactive about a review of someone else’s book, how might she react if I read hers and give it a poor review?