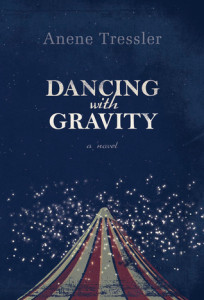 Book number nine of my Taking Care of My Own challenge is Dancing with Gravity, by Anene Tressler. She isn’t actually a Goodreads friend. As far as I can see she doesn’t even have an account. (How is that possible?) But I met her at a mutual friend’s Christmas party and she’s a really cool woman. In fact, as soon as I got home I rushed to Amazon to buy her book. I just kept putting off reading it because it’s not SciFi or Fantasy and I’m so addicted to these genres.

Description from Goodreads:
Father Samuel Whiting does not set out to be a hero. He doesn’t want to save the world or even save the day. Instead, he simply exists, asleep in his own life, adrift in a loneliness of his own creation. And then the circus comes to town and his self-imposed isolation is shattered. As he gradually awakens to a world of possibility, he embarks on the hero’s journey of discovery through the uncharted terrain of his own heart. His is a tale of insecurity and false hopes, of self-absorption and self-denial, of reaching out and falling short. It is a tale of struggling with integrity and striving for valor by someone who, if left to his own devices, would willingly remain an extra in his own life. Finally, blinded by self-delusion and at the brink of despair, a challenge to serve changes everything he believes about the true cost of love.

I should start by mentioning that I’m not at all religious (academically interested, but not a believer in any of the Books), so I was admittedly a little skeptical about reading a story with a priest as the main character.  However, though there are a few homilies here and there and Whiting’s faith is an important aspect of the book, I didn’t feel preached at or that the book’s main intent was actually to ‘spread the good word’ or revel in the mutual beliefs of the author and reader. (Both of which I have a pretty low tolerance for.)

I actually quite enjoyed Whiting’s story…no, enjoy isn’t the right word because this is one of those books that is good, but an uncomfortable read. Another reviewer called it emotionally draining and that’s a good way to say it. It’s draining, but it’s worth the cringe moments for the way it humanised priests. They’re often just reduced to caricatures of their collar, especially in these post abuse-scandal days. Whiting is having personal issues, but the last thing he could ever be called is a predator. The book doesn’t go there AT ALL.

This isn’t really a story about a circus. In fact, Whiting doesn’t even meet the circus performers until 35% into the book and he doesn’t get to know any of them until closer to 60%. It’s not really a story about one man’s desire to rediscover the value of his calling or vocation either, though it’s touched on. This is a story of one man’s almost unconscious search for meaning in his life.

He’s having a bit of a midlife crisis, not that he realises that and it takes the form of ‘love’—deep, passionate, obsessive, self-absorbed, utterly extinguishable ‘love’…twice in a matter of days. The story really is watching his internal struggles.

At one point Whiting says to another character, “You always make me sound so naïve.” She responds that he isn’t, but he is. It part of what makes him so loveable. He’s naïve, but not stupidly so. He’s just more inclined to see the good in a person or circumstance than the potential for harm, even when it’s obvious.

In the beginning he reminded me of Prince Myshkin from Dostoyevsky‘s The Idiot, full of emotional reflection and genuine good will, but a step removed from social understanding and therefore often confused and deceived (if only by himself) and therefore deemed deficient.

By the end however, he was differnt. He’d been broken and reformed to become something else, something more. And it was a painful, if unacknowledged, process for everyone involved. There were also some very real consequences of his actions, inactions and inattentions. His transformation was subtle, but oh so real.

The writing was marvellous. It matched the tone of the book wonderfully. I did think that some of the internal thoughts were disruptive. Not all of them, most played an important role in letting us in on Father Whiting’s mental state. The man started the book fragile; I mean he’s a mental and emotional basket-case. I don’t mean crazy, but he overanalyses everything, second guesses himself constantly, and is overly aware of his own social awkwardness (thereby, of course, making it significantly worse).

The internal (and occasional external) monologues are important, but other ones aren’t. There are times he does things like make a cup of tea, thinks, “tea will make it better” and then sits to drink his tea. The thought is redundant and breaks the narrative. There were a number of these sorts of little internal snippets that I could have done without. But for the most part, it was well written, engaging and thought provoking.

If you’re looking for a strong, character driven novel this is a good one to pick up. It’s not an easy-breezy book, but not all of them should be.

2 thoughts on “Review of Dancing With Gravity, by Anene Tressler”