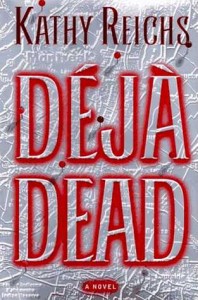 Curious about the series that spawned the TV show Bones I borrowed Déjà Dead (by Kathy Reichs) from my local library.

Description from Goodreads:
Dr. Temperance “Tempe” Brennan spends her days in the autopsy suite, the courtroom, the crime lab, with cops, and at exhumation sites. Often her long days turn into harrowing nights.

It’s June in Montreal, and Tempe, who has left a shaky marriage back home in North Carolina to take on the challenging assignment of director of forensic anthropology for the province of Quebec, looks forward to a relaxing weekend.

First, though, she must stop at a newly uncovered burial site in the heart of the city. One look at the decomposed and decapitated corpse, stored neatly in plastic bags, tells her she’ll spend the weekend in the crime lab. This is homicide of the worst kind. To begin to find some answers, Tempe must first identify the victim. Who is this person with the reddish hair and a small bone structure?

Review:
I used to read a lot of these sorts of forensic thrillers, but I guess my tastes have changed as I’ve aged, because now I read them and can’t help but notice that it’s a whole genre basically dedicated to the death and mutilation of women and I’m just so very very over it.

Other than the fact that the vast, disproportionate majority of victims in books like this one are female I also struggled through Déjà Dead in other areas. I found it dry and a bit on the slow side. There are a lot of technical info-dumps as Temperance talks to various professionals. I thought Temperance did an amazing number of truly stupid things. She was bordering on To-Stupid-to-Live territory. I thought it unlikely that the police would allow her to come along with them as they did. I thought the book’s attempt to be edgy by including prostitutes and such just came across as stereotypical. And the book is quite dated (which is not really something it can be faulted for, but still bothered me a bit).

I did really appreciate that Temperance and the detectives were all older people. It’s so refreshing to find professionals as experts in their fields who are written as actually old enough to have earned their degrees and the requisite experience to become experts. Not to mention having and dealing with true adult problems. I liked the anthropology. I liked the characters; even the jerks had their moment of redemption. I liked that it’s set in Quebec. So, in the end, I’m gonna call this a so-so read and not make any effort to continue the series, but also not boycott it or anything.