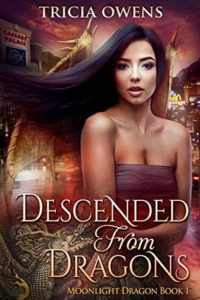 I grabbed Tricia Owens‘ Descended From Dragons when it was free on Amazon.

Description from Goodreads:
To save Sin City, she must battle Hell. Too bad the odds are against her.

Beneath the glitz and glamour of Las Vegas lies another city. A secret city in plain sight, full of warlocks and demons, shapeshifters and golems. A city that feeds off the chance magick that is generated by gamblers and which is ruled by mysterious beings called the Oddsmakers.

It is in this strange underbelly of the occult that Anne Moody runs a cursed pawn shop for the desperate, the curious, and the magickally inclined. Though the job is boring, it keeps her under the radar. None of her customers have any inkling that she is a dragon sorceress with a power that’s been feared throughout history. One day, a visitor to her shop pawns a stone statue that is more than it appears. The statue is a gargoyle named Vale, who is shrouded in mystery and secrets. When she learns that Vale is possessed, and that the person responsible for cursing him plans to take over Las Vegas with a horde of demons from Hell, Anne realizes it is up to her to defy the Oddsmakers and save the city, and possibly the world.

Review:
Eh, amusing enough but not overly impressive, nothing we haven’t all seen before. But I still enjoyed the couple hours it took to read it and I’d read the next one. I liked that Anne unequivocally saved the day and that the characters were racially and culturally diverse. The ending felt a bit abrupt and the world wasn’t very developed. All in all, a nice fluffy book to pass the time with, as long as you’re not looking for something particularly original.