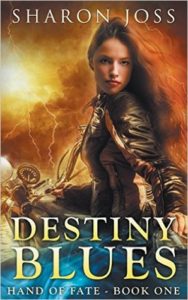 I grabbed a copy of Sharon Joss‘ Destiny Blues when it was free on Amazon. It was still free at the time of posting.

At work, in her car, even at the foot of her bed. And with the FBI on the hunt for a rogue demon master, she’s desperate to get rid of them. Thwarted at every turn to solve her problem through legitimate channels, she turns to Shore Haven’s sexy mage for the answer: a fate she refuses to accept.

But as the serial killer’s victims pile up, Mattie realizes there’s only one way to stop a demon master. To save her friends and the people she loves, Mattie must choose between her life and her destiny.

Review:
An amusing but ultimately insubstantial read. The book had an interesting magic system and I liked the main character well enough (despite her cliched clumsiness and cutesy job), but the story felt flimsy and the story contradicted itself in numerous small ways. For example, the fact that it was set in a small town where everyone knew one another was emphasized. However, the main character, her mother and her brother all lived there their whole lives but never happened to be recognized by the family they supposedly look just like. Or people who summoned demons were treated as terrorists, but demons never seemed to be summoned. Instead they were caught, like virus. Similarly thin was the character development. No one felt very well developed, some characters devastatingly one-dimensional (the brother and best friends, for example). All in all, I enjoyed the read but didn’t feel it would hold up to much scrutiny.