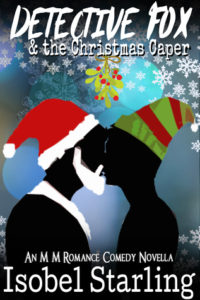 Isobel Starling sent me a link to Instafreebie for a copy of Detective Fox and the Christmas Caper. I must be feeling the Christmas spirit. This is the second Christmas novella I’ve read this week and until Nov. 27th you too can get a copy free in the Big Gay Fiction Giveaway.

Description from Goodreads:
Every good Dick needs a sidekick…

Actor Tom Lewis’s world came crashing down when a honey trap and tabloid exposé outed him and put pay to his flourishing career. The housewives favourite was most well-known for his role as ‘Detective Fox’ in the quaint British series Malmesbury Murders. But after the media speculation about his sexuality, the show is in hiatus and Tom hasn’t worked six months.

Now things are getting serious, the money he made from M.M is running out and he needs a job desperately. So when Tom’s agent offers him a six week seasonal acting job, he reluctantly agrees… and takes on the role of Santa for a top London department store.

This decision changes Tom’s luck. Not only will he have an income for the holiday season, he’ll also be working with a very sexy young elf that he spotted at the auditions, named Eli Mason.

While on a break Tom overhears two unidentified store workers discussing a ‘job to get a little Christmas bonus”. He realizes the job is of the illegal sort. Now, Tom could call the police, but then again, wouldn’t it be great for his flagging career if Detective Fox saved the day.

So Fox is on the case, and as every good Dick needs a sidekick, Tom decides Eli will fit the role, in more ways than one.

Review:
Just a short review tonight; this was a cute little Christmas Novella. I enjoyed Tom and Eli’s age gap and the reversal in roles. I did think it a shame that the initial getting to know one another was skipped, the caper was solved a little too easily, and the editing was a bit touch and go in places. But all in all, I liked it.