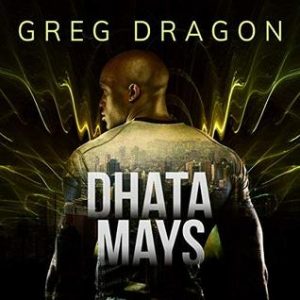 I received an Audible credit from the author (Greg Dragon) for a copy of Dhata Mays. At the time posting, the Kindle version was also free.

Description of Goodreads:
In a war between man and machine, he must find a way to protect them all…

After a devastating war forced humans to rely on synths for survival, the two have learned to coexist peacefully.

When detective Dhata Mays is called in to investigate a homicide, what he uncovers threatens the serenity of this futuristic society. The gruesome murder means only one thing: someone is ready to incite another war. Now, it’s up to Dhata to ensure that the truth stays hidden–to protect both sides of the battle. But can he be unbiased in a black and white world that forces him to take sides?

Review:
I quite enjoyed this. It was a little bit futuristic noir, a little bit Maze Runner. Hell, there might even have been a little Elijah Baley in Dhata. It was a good mix. Yes, Dhata was just a little too perfect—a little too tough, with too many connections in all the wrong places to somehow be one of the few clean cops left around. But I liked him and the book all the same. The writing was sharp (though occasionally oddly formal), the mystery progressed at a nice pace, and the persecution of Synths could easily be read as an allegory. I look forward to reading more about him. And Tucker McDougall did a marvelous job with the narration.

On a side note, it’s worth knowing that there is a glossary at the end of the Kindle edition that I think may be missing in the Audible version, which is a shame. I needed it for some of the slang.