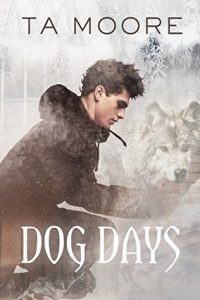 I borrowed Dog Days, by T. A. Moore from Hoopla.

Description from Goodreads:
The world ends not with a bang, but with a downpour. Tornadoes spin through the heart of London, New York cooks in a heat wave that melts tarmac, and Russia freezes under an ever-thickening layer of permafrost. People rally at first—organizing aid drops and evacuating populations—but the weather is only getting worse.

In Durham, mild-mannered academic Danny Fennick has battened down to sit out the storm. He grew up in the Scottish Highlands, so he’s seen harsh winters before. Besides, he has an advantage. He’s a werewolf. Or, to be precise, a weredog. Less impressive, but still useful.

Except the other werewolves don’t believe this is any ordinary winter, and they’re coming down over the Wall to mark their new territory. Including Danny’s ex, Jack–the Crown Prince Pup of the Numitor’s pack–and the prince’s brother, who wants to kill him.

Review:
Eh, it was cute in its own way, I guess. I liked Danny a lot, but I never warmed up to Jack. He was arrogant and rude, start to finish. And yes, I get that as a wolf he didn’t have the same human sentiments or mores, but I never liked him. And disliking one of the main characters is hard on a book.

The writing was fine, but it all felt a little pointless. There is a whole apocalyptic set up and quite a lot of time is dedicated to it, but ultimately it’s all backdrop to a minor battle that doesn’t really effect anything in the long run. Maybe this is the first in a series, it might make more sense then. But as it stands now, I finished it feeling pretty meh about the whole thing. I didn’t dislike it, but I wasn’t overly impressed either.