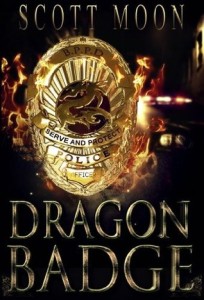 In December 2012, I grabbed a free copy of Dragon Badge, by Scott Moon.

Description from Goodreads:
Street cops face a crime trend no one saw coming. Who could have predicted what a person would do to possess another soul?

Michael Prim is a cop’s cop, taking down drug dealers, killers, and all kinds of predators, until he realizes a sorcerer has a vendetta against him and is using hellhounds, demons, and soul slaves to exact revenge.

MICHAEL PRIM
Michael Prim is a hard charging beat cop soon to be thrust into a world of dark magic. He has always been a bit of a freak: different, strange, and always needing to prove himself. His last memories of his father were of bedtime stories—the mercenary war, dragon slaying, and demon fighting variety. He knows how to come down hard on wife beaters, pedophiles, and cop killing drug lords, but nothing has prepared him for the sorcerer who is coming for his soul.

KEITH MARIN
Keith Marin takes a new prostitute under his wing and tries to protect her, because she continually winds up in the gutter raped, tortured, and clutching a strange jar with a preternatural magnetism. He begins a dangerous dance with the sorcerer who has found his way to Blue Point, and discovers people from all walks of life who are slaves to the soul jars and little more than zombies. When two homeless layabouts who frequent his beat turn up driving a BMW, wearing tailored silk suits, and carrying serious firepower, Marin takes his investigation to the next level.

NICOLE SIMMONS
Nicole Simmons has come out of hiding and reinvented herself—as a rookie cop. She begins to doubt her choice as soon as she is assigned to a training officer who is the archenemy of her kind. She should kill him and disappear again, but she had hoped this time would be different.

DRAGON BADGE
Michael Prim does what any good cop would do after discovering a soul reaving sorcerer is hunting on his beat, he goes to war, even as hellhounds and Rashfellen warriors come after him. He gets a little help from his friends—a tough as nails veteran and a zombie like prostitute who holds a soul trapped in a magical jar—but when the apocalypse comes, there is only his most hated enemy, the gang member who murdered his partner, to stand against Travass Isegurad and his demons.

Review:       **Slightly Spoilerish**
I really want to say I enjoy this book more than I did, because in some ways it was really interesting, but I just didn’t. Mechanically, it could have used a copy edit. It was well written (word choice, sentence structure and such) but it was just all over the place, took about an eternity to get to the point, had a painful lack of realistic reactions to events and introduced numerous threads that were never tied into the story in any way.

The book sets all this up as if this is an otherwise normal world and these things should be freaking people out, but nope. No one seems to be bothered in the least. Half of them seem to know more than they should, but we’re never told why or how and they ALL accept the preternatural with complete ease. It was so far from believable I almost didn’t continue with the book.

Some of the loose ends suggest someone somewhere knows something. For example, at one point one character goes to an interview in which she’s asked what she considers off topic questions about magic and dragon, but it’s never explained and it never comes up outside of the one scene. Similarly, obviously the bad guy knows what’s going on, but it’s never addressed.

My second biggest issue is that the book contained a lot of unrelated police procedurals. I liked the Cop characters. I even thought that that aspect of the book was interesting and felt appreciably real, but it in no way progressed the story, In fact, it caused it to really drag. As an example, about 10% in you meet the sorcerer that will be the antagonist. Then he and that aspect of the plot doesn’t show up again until about 60% in. Everything in between is police officers making routine traffic stops and enjoying (or not) their time off. Interesting if it had been another book, but just a disappointing break in tension in this urban fantasy.

It’s all a shame too, because I so wanted to like it. I so wanted to wrap myself in this story and it’s characters, but the story is so buried in itself I could hardly even find it. Close but no cigar, I’m afraid.