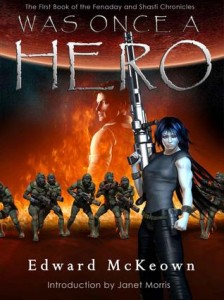 I grabbed Edward McKeown‘s Sci-Fi/Space Opera Was Once a Hero from the Amazon KDP list.

Description from Goodreads:
Reluctant privateer Robert Fenaday searches the stars for his lost love, Lisa, a naval intelligence officer whose ship disappeared near the end of the Conchirri War . He’s joined by the genetically engineered assassin, Shasti Rainhell, whose cold perfection masks her dark past. Both are blackmailed by government spymaster, Mandela, into a suicidal mission to the doomed planet Enshar. Leading a team of scientists and soldiers, they must unravel the mystery of that planet’s death before an ancient force reaches out to claim their lives.

Review:
This is space-opera at it’s best. Fenaday, Shasti, and the rest of their regular, rag-tag crew of “cutthroats, screw-ups and a few pros” have an easy going rapport that was a lot of fun to be part of. Fenaday is your basic nice guy. Someone referred to him as a “gentle pirate” and it’s an appropriate nomen descriptivum. He’s not nearly tough enough for what he does, but he’s smart enough to surround himself with those who can make up for it. I think it would be almost impossible not to like him. Shasti is just plain kick-ass…and let there be no doubt, she both has a nice ass and could kick your ass. Her character does fall a little vicim to the painful trope that for any real woman to be a brave, strong soldier she must also be broken or emotionally injured in some manner, but I’ll overlook it. Then there are a whole host of side characters, some of whom I suspect will carry over into the next book. I especially liked the Tok brothers, Telisan and Mmok.

I was a little confused about people’s country of origin. A number of characters are stated to be from certain countries (Ireland, Israel, etc.) but others are from planets (Mars, Enchari, etc.). I never could decided if the earthlings were meant to be from the actual geographic countries designated or if those countries were meant to have colonised beyond the confines of our Blue Planet. I would hope that intra-galactic travel would have weakened such human divisions.

The story itself had a little bit of mystery, a decent amount of action, a few heart-felt moments, and a couple good laughs. The book did seem to wrap up quite quickly once the mission had been accomplished and I never felt completely satisfied about the whole Lisa situation. But then again I don’t think I was meant to. This is definitely worth picking up.