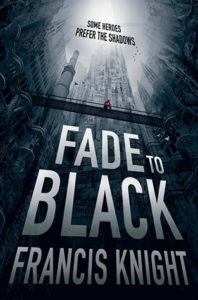 I borrowed a copy of Francis Knight‘s Fade to Black from my local library.

Description from Goodreads:
It’s a city built upwards, not across—where streets are built upon streets, buildings upon buildings. A city that the Ministry rules from the sunlit summit, and where the forsaken lurk in the darkness of Under.

Rojan Dizon doesn’t mind staying in the shadows, because he’s got things to hide. Things like being a pain-mage, with the forbidden power to draw magic from pain. But he can’t hide for ever.

Because when Rojan stumbles upon the secrets lurking in the depths of the Pit, the fate of Mahala will depend on him using his magic. And unlucky for Rojan—this is going to hurt.

Oh man, this book and I didn’t get along. There were bits I appreciated, the dark, gritty, almost post-apocalyptic atmosphere, the idea behind the pain mage, the fact that the writing is pretty crisp, and such. But I just had a lot of ragey issues with it.

Now, I’ll acknowledge that Rojan was an anti-hero and normally I can handle, even like an anti-hero. But combined with the sexism in the book, it was more than I could handle and still come out liking the character or the book.

We’ll start with the easy one. Rojan is a womanizing jerk. If he wants to avoid monogamy, fine, but he lies to his female partners and has NO RESPECT FOR THEM. Now, again, I don’t have to like everything about a hero. So, I could acknowledge this fact as an unfortunate part of the character’s character and move on. Unfortunately, I don’t think Francis Knight respects women either. Because there are so many ways women are disrespected, often in unnecessary and maybe even unintentional ways in this book that I couldn’t also accept Rojan’s sexism as a simple character trait. Instead it became one more symptom in the diseased whole.

About 30% into this book I stopped and sighed. I sighed and said to myself, “Oh, this is ANOTHER book pretty much entirely predicated on the victimization of girls and women.” (God, I am so tired of how common this is.) Basically all of the victims of violence (that does not need to differentiate by gender, the magic doesn’t know the difference) are female. I’ll give Knight credit for having a few token boy victims; that’s more than a lot of authors like this manage, but tokens really are all they are. At one point someone asks the main character how many little girls he sees running around and the answer is none, only boys. All the girls have been kidnapped to be abused. So, the reader gets this endless parade of unnecessarily gendered victims. Why only girl victims and male abuser? Gee, couldn’t be that old misogynistic idea that women are victims and men are in control?

Then we have the constant background rapes. Repeat after me, sexual violence does not always occur in conjunction with physical violence. Pain magic needs pain. That’s all, just pain. But women, girls really (the oldest they rescue from being raped was 12), are constantly being raped in the background. Sure, I get it. The old prison experiment; given unequal power the group holding the upper hand will move toward taking more liberties and a group of men holding a group of women are likely to take liberties with the women. I get the idea. But a reader can know it happens without being slapped in the face with it over and over and over again. Luckily none of it was overly graphic, but it’s constantly there. Women reduced not only to their victim status, but their sexual victim status. Honestly, I felt this was more emphasized than the beatings, which were what was necessary for the magic to work. And honestly, with a brainwashed and complicit victim (because they all become willing eventually, WTF) rape wouldn’t even be a very effective way to produce pain! I honestly thought it would have been a stronger book if Knight concentrated on pain, not the horror of victimhood. (Make no mistake; it’s the second one that is apparently important here.)

What’s more, with all these rapes happening behind conveniently closed doors, or overheard, or having just happened there is no accounting of who is doing the raping. One assumes mages and the guards, but you never actually see who it is. It’s like women are out there getting raped by the air. Hey look, women in the wild, in their natural state—raped. Notably not, hey look, a man is raping a girl. There is only victim in this scenario, no identified predator. Men remain blameless and women alone associated with the event.

Then there is Jake. OMFG, I had so many problems with the portrayal of Jake. She’s supposed to be strong, because she’s a strong fighter. But the man who knows her best undermines that by claiming it’s all show, all fake. So, she’s not actually a strong fighter. Couldn’t have that. But apparently she’s not strong mentally either. The second they enter danger she falls apart and becomes a whimpering, teary mess. Why? Because she’s been repeatedly raped since childhood, of course, and as a result she is afraid of touch. The man she loves and who loves her can’t even touch her. But good old Rojan forces himself on her all the same. Sure, it’s a soft little kiss, but a soft little kiss to a haphephobic is traumatizing. Plus, this sudden need to kiss her, even knowing she would in no way be receptive, was in the middle of a dangerous situation. It made no sense at all. But then it got worse. The best friend/love shows up and got angry, manhandling her and ultimately running off to betray her because she allowed Rojan to kiss her and not him. Because he had been the patient one, the kind one, the friend, the nice guy. He had earned her and letting another man touch her (ignoring that it was forced) was a betrayal of him. No concern for the fact that she’s essentially falling apart. And guess what, he’s rewarded for his buttholeness by getting the girl in the end.

Then there was Rojan’s love for Jake. He firmly believed he can get any woman in bed. In fact, he was only interested in women until they get in bed with him. Since Jake was the one woman he couldn’t have he fell in love with her. He basically chose her over every other person in the city. He sacrificed for her in the big climatic scene. It’s real love, apparently. But he was thinking of getting in another woman’s knickers literally on waking from that same event. Plus, this was the last sentence of the book; just to make sure we know what’s important.

The single strong woman in the book was a prostitute who had escaped the rape mages. But even then, she’s a prostitute because she’s come to view abuse and sex as normal. She needed it, so even in freedom she sought it out. See guys, it’s not so bad to rape and abuse women. In the end, they love it for real even crave that stuff. So, have at it. The single woman Rojan didn’t want to have sex with is a complete b/witch, so, you know, any woman who won’t sleep with you can’t also be a nice person. The single non-sexual girl given any agency turned out to be Rojan’s sister and sexually unavailable to him anyway. The innocent victim that prompted him to go into such danger? His niece, all because he felt guilty for watching his mother die. (See, female victims, victims, victims everywhere.)

My God, if I thought about it I could probably go on and find more example. I could probably look into the fact that the prevailing religion worshiped a goddess, but it was wholly controlled and subverted by male priests. (No indication why only men held positions of power in a female based-religion, but whatever.) So, even female deities fall under the purview of human men. What chance to mere mortal women have? Basically every aspect of this book is infused with problematic sex and gender issues that I’d bet dollars to donuts Knight didn’t even know she was writing. Unfortunately it was so thick I could barely even dig through it to find the rest of the story. I cannot tell you how disappointed I was to discover the Knight is a woman. I almost don’t believe it, but then misogyny can be as internalized for women as men.

Ultimately, I decided this is a man’s book. An author wrote a book incorporating a lot of problematic, but common ideas about women for entertainment of men, who would likely relate to them without even noticing them. But you know, I’m not a man. I noticed and I wasn’t amused.  Other than some repetition, the writing is pretty good. I’ll give it that.