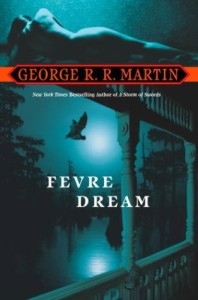 I borrowed a copy of George R. R. Martin‘s Fevre Dream from my local library.

Description from Goodreads:
When struggling riverboat captain Abner Marsh receives an offer of partnership from a wealthy aristocrat, he suspects something’s amiss. But when he meets the hauntingly pale, steely-eyed Joshua York, he is certain. For York doesn’t care that the icy winter of 1857 has wiped out all but one of Marsh’s dilapidated fleet. Nor does he care that he won’t earn back his investment in a decade. York has his own reasons for wanting to traverse the powerful Mississippi. And they are to be none of Marsh’s concern—no matter how bizarre, arbitrary, or capricious his actions may prove.

Marsh meant to turn down York’s offer. It was too full of secrets that spelled danger. But the promise of both gold and a grand new boat that could make history crushed his resolve—coupled with the terrible force of York’s mesmerizing gaze. Not until the maiden voyage of his new sidewheeler Fevre Dream would Marsh realize he had joined a mission both more sinister, and perhaps more noble, than his most fantastic nightmare…and mankind’s most impossible dream.

Review:
I picked this book up because I wanted to sample Martin’s writing without getting into the LONG A Song of Ice and Fire series and I was basically pleased. There were some things I loved, the main character Abner for example. You just don’t come across many middle aged, fat, harry, warty, UGLY protagonists and I appreciated it. Plus, I just plain liked him.

There were also things I hated, the frequent use of the “N-word” being one of them.  Now, I understand this is set largely in 1857, on the Mississippi River. Slavery was a reality and no, people of the time wouldn’t have used polite language. I get it. But it’s still nails-on-a-chalkboard for me to read and pulled me out of the narrative every-time, especially when the word was used in the narration in addition to dialogue I could blame on a character. Maybe it just wasn’t needed quite so OFTEN.

The story itself was fairly straightforward, but took enough turns to keep things interesting. I did think it was bogged down with steamboat information, but I never quite reached boredom. There were also some interesting moral questions explored by the main characters, though this was only a small part of the book. It had a great ending though.

Al in all, I enjoyed the book well enough to trust the author with a longer series. I’ll happily read more of Martin’s work.