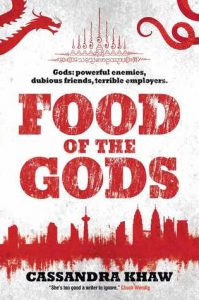 Description from Goodreads:
Paying off a debt to the gods is never easy.

It’s not unusual to work two jobs in this day and age, but sorcerer and former triad soldier Rupert Wong’s life is more complicated than most. By day, he makes human hors d’oeuvres for a dynasty of ghouls; by night, he pushes pencils for the Ten Chinese Hells. Of course, it never seems to be enough to buy him a new car—or his restless, flesh-eating-ghost girlfriend passage from the reincarnation cycle—until opportunity comes smashing through his window.

In Kuala Lumpur, where deities from a handful of major faiths tip-toe around each other and damned souls number in the millions, it’s important to tread carefully. Now the Dragon King of the South wants to throw Rupert right in it. The ocean god’s daughter and her once-mortal husband have been murdered, leaving a single clue: bloodied feathers from the Greek furies. It’s a clue that could start a war between pantheons, and Rupert’s stuck in the middle. Success promises wealth, power and freedom, and failure… doesn’t.

Review:
In deciding how I feel about this book, I kept going back and forwards with the good and the bad. The good is definitely some first class writing, a character with a good wit and sarcastic mouth, some great nods to feminism (which also seemed to highlight the bum deal EVERY wife in the book seemed to get) and an interesting world. The bad was far, far, far too much gore. I don’t say this because I’m grossed out by viscera, but because I just got mindnumpingly bored of reading yet ANOTHER scene of some hapless human being shredded. (On a side note, how did hundreds of people keep disappearing and no police ever investigate?) And I could have definitely done with a glossary. All in all, I’d happily read more of the series. But I think I’ll step away for a breather first.

As an additional note on this version of the book, the actual physical book, the font is very small. As are the margins and line spacing. (Definitely below average.) I admit I’m 40, but I don’t yet need reading glasses and I found this…maybe not difficult, but not easy to focus on and read.