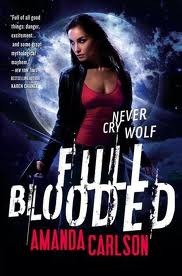 I bought an ecopy of Full Blooded, by Amanda Carlson.

Description from Goodreads:
Born the only female in an all male race, Jessica McClain isn’t just different—she’s feared.

After living under the radar for the last twenty-six years, Jessica is thrust unexpectedly into her first change, a full ten years late. She wakes up and finds she’s in the middle of a storm. Now that she’s become the only female full-blooded werewolf in town, the supernatural world is already clamoring to take a bite out of her and her new Pack must rise up and protect her.

But not everyone is on board. The werewolf Rights of Laws is missing text and the superstitious werewolves think that Jessica means an end to their race. It doesn’t help when Jessica begins to realize she’s more. She can change partway and hold her form, and speak directly to her wolf. But the biggest complication by far is that her alpha father can’t control her like he can the rest of his wolves.

When a mercenary who’s been hired by the vampires shows up to extract information about the newly turned werewolf only days after her change, they find themselves smack in the middle of a war and there’s no choice but to run together. When it’s up to Jessica to negotiate her release against her father’s direct orders, she chooses to take an offer for help instead. In exchange, Jessica must now swear an oath she may end up repaying with her life.

Review:
I thought this was ok. There were things I liked, like Jessica’s insistence on independence and the way Rourke went all desperate and weak-kneed at toward the end, not to mention needing rescue. But while I found the latter half of this amusing and would read more of the series, I wasn’t overly impressed.

One of my number one dialogue pet peeves is when characters say each-other’s name all the time. Think on it; if you’re having a conversation with someone, especially if it’s just the two of you alone, how often do you say their name? Maybe once, in the beginning to get their attention, if even then. In this book these characters used a direct address or name in almost every interaction, sometimes multiple times in the same brief conversation. It drove me absolutely crazy. It just feels so very unnatural.

There is non-stop action in this book and, while action is good, it prevents boredom, there is no downtime in this book and I think it needed some. The characters needed a breather here or there, so that the reader could take a moment to digest. You’re never given any time for big reveals to settle before the book whizzes off to something else, denying the moment any gravitas.

It’s also a cliffhanger. True, it’s not a precipitous as some of them I’ve encountered and I don’t mind some open threads to carry over into a next book, but nothing really wraps up in the story, which annoys me in general, but is especially annoying when the ebook is $8.99 (a new paperback is only $5.20). Seems a little expensive for just part of a story, and that’s honestly all this is.