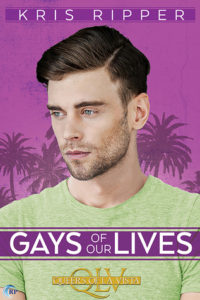 I received a copy of Gays of our Lives, by Kris Ripper, from Netgalley.

Description from Goodreads:
Emerson Robinette only leaves his apartment to get laid and go to work. Having MS—and trying to pretend he doesn’t—makes everything more complicated, especially his fantasies of coming on strong and holding a guy down. Finding a partner who’ll explore that with him isn’t Emerson’s idea of a realistic goal.

Until a chance meeting with a hipster on a bus makes him reconsider. Obie is happy, open-hearted, and warm; what’s more, he gets his kicks being physically dominated, spanked, and teased until he’s begging. It would be perfect, except for one thing: Emerson isn’t made for happiness, and he doesn’t see how a guy like Obie would settle for a cynic like him.

But as far as Obie’s concerned, the only thing keeping them apart is Emerson. Can Emerson handle a boyfriend who’s more invested in his future than he is? Emerson’s barely convinced he has a future. But when Obie’s smiling at him, anything seems possible.

Review:
First off, I love the play on the soap opera titles. Very clever. Second, I love that Ripper subverts so many expectation in this book. The reader is given an inexperienced, dominant sadist who does not match the general stereotype of such characters, physically or emotionally, a romantic lead struggling with MS, an unexpectedly aggressive maybe-submissive, and a mom who doesn’t follow the cult of motherhood/domestic goddess script (and subsequently echoes many of my own experiences of pregnancy and early parenthood, the baby shower especially). And it all works.

On the surface it would be easy to just call Emerson a jerk and be done with it. But his diagnosis was still new. He’s still angry and grieving the life he felt had been stolen from him. In that light, his attitude was perfectly understandable and from his perspective I understood it.

I admit I struggled a bit more with Obie. I loved him. He was wonderful, but I struggled to understand why he put up with Emerson’s continued foul attitude. Had they been in a previous relationship and he was sticking by his man, sure, but with nothing invested I didn’t understand why he didn’t walk. But with a little suspended disbelief I was able to fully engage with and enjoy their budding relationship and exploration of one another.

The writing was good and editing clean. All in all, a success.