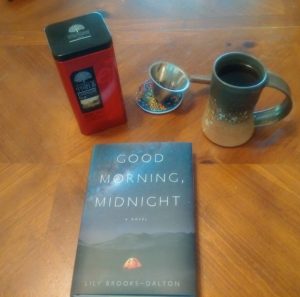 I won a copy of Lily Brooks-Dalton‘s Good Morning, Midnight through Goodreads:

Description from Goodreads:
Augustine, a brilliant, aging astronomer, is consumed by the stars. For years he has lived in remote outposts, studying the sky for evidence of how the universe began. At his latest posting, in a research center in the Arctic, news of a catastrophic event arrives. The scientists are forced to evacuate, but Augustine stubbornly refuses to abandon his work. Shortly after the others have gone, Augustine discovers a mysterious child, Iris, and realizes the airwaves have gone silent. They are alone.

At the same time, Mission Specialist Sullivan is aboard the Aether on its return flight from Jupiter. The astronauts are the first human beings to delve this deep into space, and Sully has made peace with the sacrifices required of her: a daughter left behind, a marriage ended. So far the journey has been a success, but when Mission Control falls inexplicably silent, Sully and her crew mates are forced to wonder if they will ever get home.

As Augustine and Sully each face an uncertain future against forbidding yet beautiful landscapes, their stories gradually intertwine in a profound and unexpected conclusion. In crystalline prose, Good Morning, Midnight poses the most important questions: What endures at the end of the world? How do we make sense of our lives?

Review:
Liu Cixin has several short stories involving space explorers that return to Earth to find nothing left, or Earth so changed as to no longer welcome them. This reminded me a lot of some of them. It has a similar kind of emotional distance to it, a similar feel.

The writing in Good Morning, Midnight is really stunning. As is watching the emotional growth of the characters. This is a book that happens almost entirely in the minds of two brilliant scientists, both of whom are confronted with their own version of isolation, forcing them to consider and reconsider their lives. It’s beautiful, even if it’s not action packed.

However, there is a VERY LARGE mystery that is never solved for the reader and a fairly large reveal that the reader is aware of and the characters not. I found both of these profoundly dissatisfying. Yes, I can see how they force the reader to share the characters’ confusion and frustration at simply never knowing, but I found it difficult to accept. All in all, though, a good read.

What I’m Drinking: According to the tin, it’s Yun Chinese tea. If I could read Chinese I would tell you more. This is tea that someone gave me, so I know very little about it, beyond that it’s Chinese black tea. (I tried preparing it as green once, with the water at 175° instead of boiling, resulting in a very disappointing brew. Definitely what I would call black.) When prepared properly, it’s nice though. Plus, it’s a happy coincidence that I paired a book that reminded me strongly of a famous Chinese science fiction writer with it.