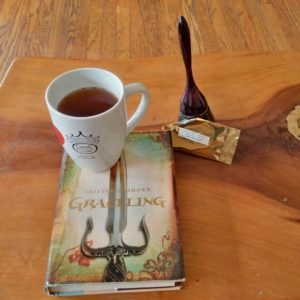 I bought a copy of Graceling, by Kristin Cashore.

Description from Goodreads:
Katsa has been able to kill a man with her bare hands since she was eight – she’s a Graceling, one of the rare people in her land born with an extreme skill. As niece of the king, she should be able to live a life of privilege, but Graced as she is with killing, she is forced to work as the king’s thug.

When she first meets Prince Po, Graced with combat skills, Katsa has no hint of how her life is about to change.

Review:
Well, that was a pleasant surprise. I went through a YA phase a couple years ago, but almost every YA book I’ve read since them has made me all sorts of ragey. This was an exception.

I thought Katsa was a marvelously strong female characters, but also able to be compassionate and kind. (Not just a man with tits, which is a very common misrepresentation of strong women in my experience.) In fact, learning this fact was one of her biggest challenges of the book.

I liked seeing a common gender trope turned on its head, as it’s usually the tortured hero, instead of a heroine. The few other times I have encountered this, it’s been accompanied by an inference that she struggles with her own violence because she’s female and a man wouldn’t be so bothered, because he’s strong enough to handle it. Making her reluctance to kill a gendered fault, not a moral dilemma. I never felt that here, even as Katsa fought to move past being little more than a brute. It was personal growth, not personal weakness.

We had male/female platonic friendships. We had supportive female/female friendships. (It passes the Bechdel test.) We had a same sex couple. We had a male romantic partner that was empathic, expressive and liked pretty things. We had a romantic pairing that was presented as valid, even when it didn’t end in wedding bells and baby bonnets. We had men willing to accept a woman as their leader and be more skilled than themselves, without feeling humiliated. So much to appreciate.

I did think Katsa’s dislike of dresses and hair and such pretty things compromised the authors attempt to make her both strong and female. Why can’t she be a strong fighter and like female things? It’s like she can be female and strong, but not feminine and strong. She can remain a woman, but she has to give up the trappings of her gender before she can be convincingly strong and valiant? (This is one of the few man-with-tits strong female character traps I noticed Cashore falling into.)

This and some of Katsa’s obliviousness and ‘specialness’ felt a cliched. As was the use of sexual deviance to make the villain especially evil. This is plot device that has been used so often that it’s lost all effectiveness for me. I see it and think, well, the author just grabbed a pre-formed baddie for this one, didn’t she? Sexual deviance is frequently used in books to telegraph that a man is not just a bad man (a bad man might just be violent), but a very bad man and if he targets children a very, very bad man. No depth or exploration of character needed, because these actions are already conveniently placed on the continuum of evil for reader connivance. Plus, I didn’t really think it matched the tone of the res of the book.

Lastly, I thought there was a notable change of pace between the first and the second half of the book and Katsa was a little too resilient, accomplishing things that really should have killed her, even with her Grace. But all and all, I enjoyed this book.

What I’m drinking: A sample of Gwy-u Latte, given to me by the proprietor of Traveling Tea, when I last visited. I’d mentioned that I enjoyed chicory and she thought I might enjoy Gwy-u Latte tea. I did, very much. It’s a “green guayusa herbal honeybush rooibos blend.”