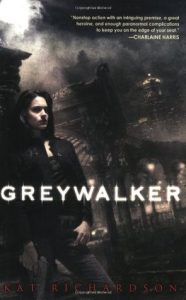 I bought a second-hand copy of Greywalker

, by Kat Richardson at a bricks and mortar store.

Description from Goodreads:
When Harper comes to in the hospital, she begins to feel a bit …strange. She sees things that can only be described as weird-shapes emerging from a foggy grey mist, snarling teeth, creatures roaring.But Harper’s not crazy. Her “death” has made her a Greywalker-able to move between our world and the mysterious, cross-over zone where things that go bump in the night exist. And her new gift (or curse) is about to drag her into that world of vampires and ghosts, magic and witches, necromancers and sinister artifacts. Whether she likes it or not.

Review:
This book was dated. Which I really can’t blame it for. It was written when it was written, and if pagers, Hansen and Brosnan as Bond were the markers of the time, so be it. What I can fault it for is being boring and feeling too scattered.

The action starts without allowing the reader time to get to know Harper and then doesn’t really provide further opportunity as the plot progresses. Thus, I never felt connected or invested in her. I simply didn’t care all that much. Plus, she’s whinging and denying her abilities through the whole book, while simultaneously accepting vampires and witches and ghosts as blasé. And as soon as she has abilities, those vampires, ghosts and such start showing up all over the place. The day she returns to work she gets two (and only two) cases and both happen to be paranormal. One is explained, the other I’m supposed to believe is coincidence?

By the end she’d come to terms with her abilities, so maybe future books in the series wouldn’t seem so annoying. But unless I find a copy as a freebie, I don’t think I’ll continue with it.