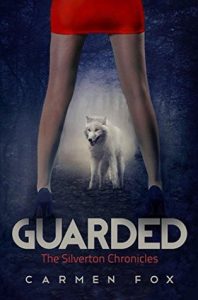 I bought a copy of Guarded, by Carmen Fox.

Description from Goodreads:
When everyone’s existence depends on the lies they tell, trust doesn’t come easy.

Ivy’s neighbors have a secret. They aren’t human. But Ivy has a secret, too. She knows. As long as everyone keeps quiet, she’s happy working as a P.I. by day and chillaxing with her BFF Florian, a vampire, by night. When a routine pickup drops her in the middle of a murder, her two worlds collide. While Florian knows how to throw a punch, deep down he’s a softie. His idea of scary? Running out of hair product. It’s time Ivy faced facts. Even with a vampire on stand-by, one gal can only kick so many asses.

For help, she must put her faith in others. A human, who might just be the one. A demon, who will, for a price, open the doors to her heritage. And a werewolf, who wants to protect her from herself.

Review:
Sigh, mechanically the writing and editing in this book seem fine. Unfortunately, in my opinion the plot is totally useless. The book is all over the place, but more to the point, I hated it.

As a romance it fails on SO MANY levels. Let me put it like this. She has a condition that after her 25th birthday (because apparently magic knows your b-day, y’all) she literally lusts after every man she sees, even though she actively doesn’t want to. She then goes on to try and date one man, have sex with another (several times), almost have sex with a man in an alley, and love a man. Unfortunately, she doesn’t do any two of those things with the same man. That’s right, she’s trying to date one man, while having sex with another (and lusting over everyone) and then on the last page, last paragraph basically we’re told she loves another. WTF? There was no development on that. But what kind of satisfying romance do you think a book can have if the heroine trying to give her body to every man she meets,?

But, for me personally, the biggest issue is that this idea that women can’t control their own sexual urges is an old, painfully patriarchal one. It’s one of the reasons why they can’t be trusted to own and have authority over their own bodies. We still fight this stupid idea to this very day, in real life. And the book had the perfect patriarchal ending, she pretty much ended up with a man who had the power (extra power she gave him) to control her. She goes against her own natural inclinations to be with him. You know what, author, write historical if you want to write this kind of trite. I ended the book steaming.

The whole thing was only made worse by there being exactly 3 women in the book, other than main character and some background victims (who were raped, because of course they were). Two were characterless sisters, basically just names to fill in the cast. One was the cliched jealous harpy who will probably sell the heroine to the villain in future books, because that’s what the jealous harpy always does in such books.

I bought and read this book because, somewhere along the way I ended up with an audible copy of book two (Bound), and wanted to listen to it. Now, I’m kind of regretting both.