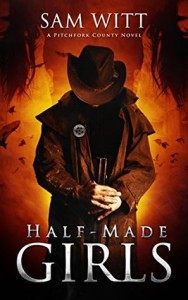 Description from Goodreads:
Joe Hark’s job as the Night Marshal of Pitchfork County seems straightforward enough: Find the monsters, kill the monsters. But Joe is married to one of the most powerful witches in Pitchfork, and spends almost as much time keeping an eye on her as he does dealing with occult crimes and shadowy horrors in the rest of the county. Even his children, a little girl who plays host to a rogue’s gallery of strange spirits and a young man with a demonic secret, keep him on his toes. All Joe really wants is a simple life, a bottle of good whiskey, and a break from the horrors of his job.

But nothing in Pitchfork County is ever simple, and the horrors just keep on coming. Someone’s hung a mutilated girl on a cross in Pitchfork’s most infamous church, dragging Joe into the most challenging case of his career. Joe’s investigation into the ritual murder leads him through the dark underbelly of the Ozarks to the doorstep of a twisted cult of meth addicts. As Joe digs deeper into the mystery, he soon finds himself the target of the murderers and must stop them before they can summon their dark god and destroy everything he holds dear.

Review:
There is a lot to appreciate about this book. In a market that is so often flooded with Marty Stus, finding an alcoholic asshole as a main character/hero is pleasant change. The man is definitely fighting on the side of good, but he is what you might call a ‘blunt tool.’ His methods are violent and heavy-handed to say the least.

In fact, it’s the accumulated resentment of these same tactics that the book is based on. Poor Joe has to learn the difference between shepherding and policing a community and it’s a hard lesson to learn.

Unfortunately, while I really liked the premise of the book and thought the characters were really interesting, I thought the book tended to drag. There is a lot of rambling exposition and just too much gratuitous gore and violence.

Now, I don’t really mind violence or gore; that’s not the reason for my complaint. I’m not even bothered by the fact that the victim (intended or collateral) of Joe’s wrath was as often a small innocent child as a meth addict or evil god. What bothered me was that it just got so darned repetitive. I got tired of reading variations of the same scene. But also, that single pony-trick didn’t allow for very much character development.

This was exasperated by the fact that the community situation that leads to the events of the book has been brewing for 20 or so years and the reader is just told it is what it is. It leaves you feeling like you’ve missed something important, like maybe a first book.

All in all, though I enjoyed the read. I’d be more than happy to pick up a sequel or another book by Witt.