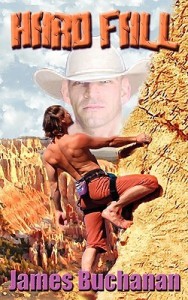 I downloaded a copy of Hard Fall, by James Buchanan, from the publisher when it was available a s a Christmas freebie.

Description from Goodreads:
Deputy Joe Peterson is Mormon and in the closet. Then ex-con Kabe Varghese lands in town on parole. When a tourist falls off the mountain, Joe finds he needs the help of this cliff climbing adrenaline junky to solve the case. Will Kabe tear him apart or does Joe need to fall hard before he can start living?

Hmmm, well three stars I guess. It wasn’t bad but I didn’t think it was great either. Mostly, there were certain aspects of it I really appreciated and other aspects that just left me cold.

To start with I liked Joe. He was a good ‘ol boy, for sure, complete with the linguistic characteristics, hunting references and preference for Stetsons and cowboy boots. I liked that he was basically a good man. I really liked his faith and, as it’s instrumental to the plot, how he struggled to bring being a gay man in line with it. Outside of being gay he was a devout Mormon. He didn’t cuss; drink alcohol, or even caffeine. He attended church and paid his tithes without complaint. He appreciated the grandeur of nature and used it as a means to connect with his spirituality and God. He even wore all the church-sanctioned undergarments. (And how did I not know, or not remember maybe, that Mormon’s have their own kind of underwear?) GOOD MAN.

I liked Kabe less, but I didn’t dislike him. Honestly, he felt less substantial, as if he was just there for Joe to interact with. But he served his purpose.

Some of the sex was hot and Joe’s internal dialogue of falling in love was sweet. So, the book isn’t without praiseworthy material.

However, Joe’s drawl got on my nerves at times. Kabe’s refusal to understand Joe’s position and difficulties felt selfish. I got lost in some of the climbing terminology. I cringed over some of the handling of evidence in the case (though other aspects of it were well done). I hated the way Joe called Kabe ‘boy,’ even though I didn’t sense he was supposed to be that much older. It grated like an insult every-time he said it. I thought that the first spanking scene felt like abuse (and the second one not a lot better) and honestly the whole Dom/sub spanking thing came completely out of left field and felt wholly out of place with the rest of the book.

So, in the end, it was a fine read but not something that lit me up in any true fashion. Though, I’m totally stealing the phrase “You’re hats on too tight.” for when people say stupid things. This is worth remembering.

As a side note, Kabe was supposed to have been of Indian descent (dark skinned/haired). So, who’s that white, blondish guy on the cover? I hate when publishers put characters on the front of books and they don’t match those actual characters.