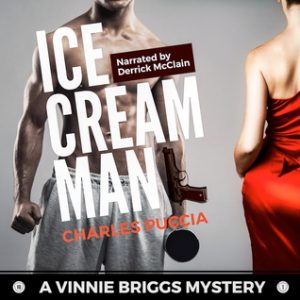 for review. A copy of the ebook can be downloaded for free from Puccia’s blog.

Description from Goodreads:
Solving a marital problem can create bigger problems –ones that lead to murder.

For the love of his boss, Vinnie pays. He should know that benefits don’t always accrue to the person paying.

VINNIE BRIGGS will do anything to help his boss DAN LIVORNO at Del Vecchio & Neal, Inc. Dan is the most beautiful and intelligent man Vinnie’s ever met, and he has met a lot of men in his short twenty-two years. Dan’s problem derives from his wife –GINNY LIVORNO’s obsession with super strong, muscular men: sthenolagnia. Jealousy consumes Dan, and for good reason: Ginny’s drop-dead gorgeous, the kind of woman you rarely meet, if ever.

Dan’s believes to help Ginny he must remove her from the source of her obsession, the champion pro bodybuilder BEN HAUSEN, and Ginny’s personal trainer. Out of sight, out of mind. Just because Ben’s gay doesn’t reduce Dan’s jealousy, leading to irrational decisions.

Dan knows his marriage is at stake. Ginny agrees, but not because of her so-called obsession, which she denies. A fortunate circumstance presents Dan his solution: apply for the DV&N’s directorship of European Financial Services in Paris.

LINDA LORDS, Dan’s rival in financial analysis, has the same goal. With the help of BILL BARRINGTON, the executive vice president at DV&N, she has a better shot at the Paris job. Linda and Bill have their obsession to satisfy–greed. As co-conspirators, with Linda in Paris, they can embezzle enough money to begin new lives. Joining the superrich, they’ll abandon family obligations and morality. The have visions of unbridled sex, gambling, and any other vice they choose, not necessarily with each other. All they need do is eliminate Dan as challenger for the directorship.

Lucky for Dan he has Vinnie to help him, and unlucky for Vinnie, Bill has the Brooklyn mob. Dan has no idea his easy solution to resolve Ginny’s sthenolagnia will change his understanding of the world. Straight arrow Dan must learn about real passion, gay sex, bodybuilding, and cheaters.

Dan’s apparent simple solution begets a complex one. He’ll need Ben’s help, the very muscle hunk he despises. Dan’s new problem is not to solve his marriage, but Vinnie.

Review:
I have really mixed feeling about this book. The writing is fine, as is Derrick McClain‘s narration, but the story seemed to go off the rails at some point and I still can’t quite finger it’s location on the genre spectrum. There is a mystery to be solved by the characters (the reader knows who done it), but there is too much focus on relationships and sex to be a mystery novel. There is focus on a relationship, but not the right sort of focus to be a romance. There is erotica-level sex (in fact, the last 1/4 or so of the book is basically just sex), but it’s clearly not an erotic novel. In the end, I’m not sure what it is. All the disparate pieces just don’t fit together quite right. The graphic sex especially seemed out of place. And I say that as someone who loves a good, dirty erotica.

Similarly, this is a “Vinnie Briggs” novel, but Vinnie isn’t the main character. In fact, he’s in a coma for most of the book. (Though I did find him by far the most endearing character.)

Lastly, some aspects of the book simply made me uncomfortable. Some of the language grated. I know bad guy characters can be expected to use derogatory language. But I didn’t enjoy having it scrape against my backbone, thus it detracted from my enjoyment of the book as a whole. There are gay characters and they’re represented well. But I also felt that there was a certain discomfort with them. It was in some of the subtleties of language and the way they themselves are used by straight characters. Lastly, Ginny has a sexual obsession that she clearly coerces others into participating in. If she was a male character, treating female characters as she does Dan and Ben there would be outrage. As it was, I hated her throughout the whole book.

In the end, I didn’t dislike the book. But I think I’d only continue the series if I found the next book free. So, I liked it enough to read, but not enough to allocate funds for it. That makes it a fairly middle of the road read.