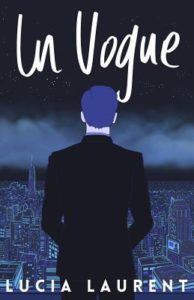 I won a copy of In Vogue, by Lucia Laurent through Goodreads.

Description:
King of New York fashion and editor-in-chief of the prestigious Couture magazine, Miles Brodeur loves his demanding job and a routine that means he always knows what’s coming next. Deeply involved in the magazine’s content and culture, Miles doesn’t have the time or the desire for a relationship.

Alexander Mackenzie is a former model turned magazine editor who is just learning about the politics that exist at the intersection of high fashion and publishing. He’s always dreamt of turning Miles’ head and one night, at a glamorous party, his fantasy becomes reality. But Miles’ workaholic nature conflicts with Alexander’s belief that “there’s more to life than what’s printed on the pages of a magazine.”

Despite their fundamental differences, Alexander can’t help but follow Miles back to New York, and once there it becomes clear their association could be addicting–and possibly life-changing.

Set in a world where the beauty of art and the written word collide, Miles is confronted by a fundamental question: is someone ever worth slowing down for?

Review:
This book is 428 pages long, with a plot that might have successfully carried 128. It is faaaaar too long and, well, dull. And over-written. And purple. And largely tell, as opposed to show. And written in third person, present tense, which provides and uncomfortable distance between the reader and the characters. And cluttered with brand names/outfit descriptions, which ok, it’s about fashion. But man did I get tired of it. Plus, while I know fashion can be out there sometimes, some of the outfits sounded ridiculously not sexy, like shorts and cowboy boots…together.

Then there was the sex. The scenes were too long and too frequent and every one was spitting and drooling in all of them. One messy scene could have made a point, but every one? I got grossed out eventually. Plus, the author used the same phrases over and over again to describe them.

Then there were the POV issues. The book is predominantly, like 90% from Miles’ point of view. But every now and again Alexander’s would get thrown in, and instead of feeling deliberate, it felt like a slip, simply because it was so rare. Conversely, there were times that if both POVs were meant to be shown, Alexander’s were sorely missing.

The book has a great cover and some of the passages are quite pretty, but I basically just had to skim the last bit because I just couldn’t take any more. I didn’t connect with the characters. I didn’t enjoy the flood of clothing. I didn’t think Miles’ behaviors or change of heart felt natural. All in all, this one was a fail for me. Many people like it though.