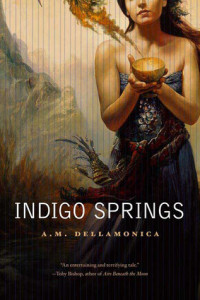 I borrowed Indigo Springs (by A. M. Dellamonica) from my local library.

Description from Goodreads:
Indigo Springs is a sleepy town where things seem pretty normal . . . until Astrid’s father dies and she moves into his house. She discovers that for many years her father had been accessing the magic that flowed, literally, in a blue stream beneath the earth, leaking into his house. When she starts to use the liquid “vitagua” to enchant everyday items, the results seem innocent enough: a “‘chanted” watch becomes a charm that means you’re always in the right place at the right time; a “‘chanted” pendant enables the wearer to convince anyone of anything . . .

But as events in Indigo Springs unfold and the true potential of vitagua is revealed, Astrid and her friends unwittingly embark on a journey fraught with power, change, and a future too devastating to contemplate. Friends become enemies and enemies become friends as Astrid discovers secrets from her shrouded childhood that will lead her to a destiny stranger than she could have imagined . . .

Review:
I really wanted to love this book. It’s got a beautiful cover and a truly interesting premise. On paper the characters are interesting too. The main character is bisexual, another is trans (though I was never certain if that was their natural inclination or the result of magics) and another is notably narcissistic. I should love this book. Instead, I liked it but was perfectly happy to reach the end of it.

The problem I had was that the characters never jumped out and grabbed me. They’re flat, Jacks especially. The first person POV is a character who is basically outside the primary plot, the rest is third person from Astrid’s (the main character’s) POV. I connected to neither of them. What’s more, I could never quire wrap my head around the fact that the weak, simpering woman of 95% of the novel is the same as the strong, in control woman at the end. Yeah, there’s supposed to have been some time for her to adjust, but from the readers perspective it’s a big change in personality almost instantly.

All in all, it was an ok book. I’d read another of Dellamonica’s works but I didn’t love it.