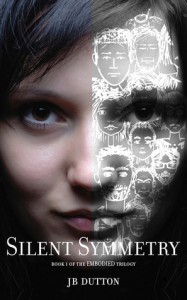 Author, J.B. Dutton sent me an ecopy of his novel Silent Symmetry.

Long Description from Goodreads:
The Embodied glide through the busy streets of New York, uttering barely a sound.

Their eerie beauty comes from their perfect symmetry. Are they flawless humans, the epitome of evolution? Are they a genetically modified super-race? Are they extra-terrestrials? Once prep school student Kari Marriner becomes aware of their existence, she is driven to find the answer and finds herself ensnared in a web that reaches further than she could possibly have imagined.

Kari’s earliest memory is her father’s death in a car crash back in small-town Wisconsin. Now, 12 years later, her mother has been hired by a pseudo-religious organization in Manhattan called the Temple of Truth (a.k.a. the ToT). At Chelsea Prep, Kari develops a crush on classmate Cruz. But when she realizes that Noon, another attractive guy at school, is involved with the ToT, her curiosity gets the better of her.

Kari stumbles upon a secret tunnel leading from her apartment to another in the building, where an ancient book holds images she can scarcely believe, and a cavernous room contains… something inexplicable. As Kari pieces together the incredible evidence, she discovers that the ToT is run by other-worldly beings called The Embodied who influence human behavior and have established a global long-term human breeding program. But why? And what is her role in all this?

Just as she starts wondering whether the love she feels for Cruz is genuine or if her emotions are being controlled by The Embodied, her mother is kidnapped and Kari has to figure out who is human, who is Embodied, and who she can count on to help rescue her mother.

Somewhat spoilerish Review:
Silent Symmetry has an interesting premise and I enjoyed that about it. I also enjoyed Mr. Dutton’s writing. However, there were also quite a few aspects of the book that left me baffled.

First and foremost, the clues that Kari followed in order to recognise that there was a mystery to the Emboldened seemed nonexistent. I get that a lot of it was supposed to be gut instinct, the lizard brain so to speak, on Kari’s part. Though that left very little for the reader to follow and go, ‘oh yea, that is weird, I wonder…’ I had the exact same response to her feelings for both Cruz and Noon. They glanced at each other and BAM! Suddenly there were emotions flying all over the place, abrupt kisses, and even the occasional he “cares about me.” Um…how does she know? Again, that lizard brain is whispering to her, but it left me lost.

The character descriptions seemed a bit on the light side too. I honestly don’t know what a single one of them was supposed to look like, except that Cruz was of Puerto Rican decent and therefore dark complected. As a result, I had a hard time visualising any of them.

Next, some of the language made me want to scratch my eyes out. Things like Oh. Em. Gee—Not OMG or Oh My God, but Oh. Em. Gee. Yes, it’s teenager speak, but it’s wrong teenager speak (in my opinion, at least). Then there was the whole Eff thing. Eff or Effing was used instead of Fuck or Fuckin’. Every time this came up I found it jarring. Not just because it seemed out of place, or because it was so frequently used, or even because that’s kind of a linguistic habit one person might have, but not multiple characters, but because other curse words were used without alteration. I counted crazy-ass, ass, shit and shitting. So why not Fuck?

Lastly, since this is the first in a series the book ended without me feeling like I had any real resolution. I kind of followed who the Emboldened were, but not really what they wanted with Kari. Is it the same thing that the Rebels wanted with her? If so, what was all the fighting about? And what of poor Cruz? Is his position secure? What of Emily? The book ended on a cliffhanger, not a seriously precipitous one, but still too early for the reader to feel any real sense of conclusion. This never makes me happy.

Again, the book is well written. I don’t remember any real editorial issues. The plot seems interesting and the cover is eye catching. So even though I have some complaints I’m not really disparaging the book. It’s worth picking up.