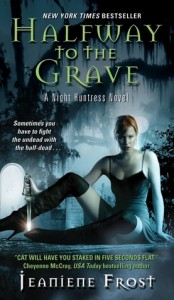 After dozens of recommendations I finally broke down and bought Jeaniene Frost‘s PNR Halfway to the Grave when I saw it discounted the other day.

Description from Goodreads:
Half-vampire Catherine Crawfield is going after the undead with a vengeance, hoping that one of these deadbeats is her father–the one responsible for ruining her mother’s life. Then she’s captured by Bones, a vampire bounty hunter, and is forced into an unholy partnership.

In exchange for finding her father, Cat agrees to train with the sexy night stalker until her battle reflexes are as sharp as his fangs. She’s amazed she doesn’t end up as his dinner–are there actually good vampires? Pretty soon Bones will have her convinced that being half-dead doesn’t have to be all bad. But before she can enjoy her newfound status as kick-ass demon hunter, Cat and Bones are pursued by a group of killers. Now Cat will have to choose a side . . . and Bones is turning out to be as tempting as any man with a heartbeat.

Review:
Saying I’m disappointed in this book would be an understatement. I have close to two thousand books on my Kindle, many of them free, but I shelled money out for this one because so many people rave about it. I’m totally boggled. Why?

I love vampire based PNR, but this book had so many of the genre’s tropes that I hate all in one place. The  emotionally unstable, angry heroine who is also painfully virginal and unaware of  her own sexuality. “I didn’t like it before. I think something is wrong with me.” Really? Despite how the whole thing worked out it never occurred to you that is was just bad sex? Her insistence on holding onto old slights so long that they become character traits. The way she went all embarrassingly cave-man possessive whenever a attractive female came around. Pet names, god the patronising pet names! The way Bones knew more about her abilities than she did. 22 years and she never noticed that she could see ghosts, for example, but he knew somehow. The constant reminders of female victimhood. (I’ll be coming back to that one.) The characters complete unwillingness to communicate in any sort of civil manner, etc.

If I had to name the theme of this story it wouldn’t be romance, erotica or even vampires. It would be women as sexual victims and the use of sex as a form of control and degradation. There are so many references to prostitution in this book I lost count. Cat’s mother is considered a whore because she had a child out of wedlock. Cat is seen similarly by extension and even called one by her mother at one point. Sergio calls Cat one before their final encounter. Bones admits to having been a gigolo when he was alive. The whole plot hinges on hunting down the head of a human trafficking prostitution ring. Though admittedly with a vampire & ghoul twist. Cat has to dress like a slut so that she can attract her marks, often posing as a working girl in the process. This despite the fact that she ostensibly has to sit through hours of dirty talk before hunting a man who has a penitent for underage girls. Really, what exactly does he appreciate about their underage status if not their innocence? Seems to me that’s the wrong front to be presenting.

And that’s just prostitution references. I could go on another whole rant about the rape victims and/or suggested victims. This book should make women fear being alone with ANY MAN. They all seem to be predators of some sort. It sapped the enjoyment right out of the book for me. There are so many sexual victims it blots out the story. I appreciate a little sexual tension here and there, but that isn’t what was sprinkled throughout this book. I felt male privilege leering at each and every female character in this book. It was disquieting.

I’ve seen a number of previous reviewers compare Bones and Cat to Buffy and Spike. I can COMPLETELY see that. It’s there, not doubt about it (intentional or not). On a related side note, Bones’ English is rubbish. I lived in Northern England for a number of years and let me tell you it isn’t convincing.

Possibly most annoying of all, however,  is that after spending 95% of the book wishing it would just end already Bradley Tate (and maybe Timmie) made me curious what what might happen next. I do not want to be tempted into any more of this drivel in the hopes that book two is better than this first one. When my two favourite people in the book are both MINOR side characters there is a problem.