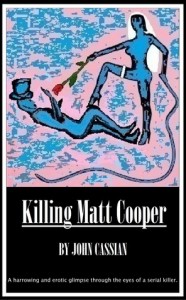 Author, John Cassian, sent me a copy of his novella, Killing Matt Cooper.

Description from Goodreads:
A FEMA crisis manager by day and serial killer by night becomes romantically involved with the FBI unit chief hunting him down. Will she learn his dark secret? If you’re a fan of “American Psycho” or “Darkly Dreaming Dexter,” this is the book for you!

Review:
I have to admit that I didn’t have high hopes for this one, going in. I had it in my head that it was going to be some base attempt to pass sexual amoralism off as excusable fetish play. And therefore declare itself admirably open minded and liberal…(read liberated) in the process. I mean, the Amazon page comes with this warning: “*GRAPHIC CONTENT WARNING!* *ABDUCTION, NON-CONSENSUAL, SNUFF* *This is a work of fiction meant for MATURE, 18+ AUDIENCES ONLY!*”

I was wrong. It wasn’t nauseatingly permissive, like I expected. There is some real depth here. But it took me a little while to figure that out. ‘Cause, in the beginning, the book did a good job of setting itself up as just such a piece of shallow exploration of sexual escapism and male entitlement.

The whole first 15% is taken up entirely by an extended, first person (from the POV of the aggressor) account of a rape and then a brief murder. At the time I found this horribly distasteful and thought, ‘yep there it is. This guy is really gonna try to play this off as OK, isn’t he?’ I was discomfited not by the eventual murder, but because, in the end, the woman was supposed to have enjoyed being dominated and raped. God I hate that trope! I really really do.

Honestly, I almost didn’t make it. At about 13%, and having gotten nothing more than an unusually long (for such a short book) and uncomfortable rape scene, I almost gave up. I essentially said to myself, ‘if this is just some literarily handed ‘sick fuck’ living out his rape fantasies I’m not interested. I’m out!’ But I figured in all fairness I should at least make it into the meat of the book before abandoning it…giving it the benefit of the doubt, of course, that there would eventually be meat. There is.

I’m thrilled I did. ‘Cause Samuel Knight has a great voice! He’s mocking and self-deprecating, delusional and poignantly self-aware. Sometimes, it’s not possible to tell which is which and that makes him eminently relatable in that respect. Oh…and he’s sick as shit. (So not wholly relatable, after all.) He’s seriously twisted in the head, totally crackerjacks, and not in a harmless, stupid-happy kind of way, but in a dangerous, remorseless psycho-killer kind of way. The thing is, you still kind of like him. Hell, you do like him; you just tell yourself that you shouldn’t, ’cause, you know, he’s nutzo.

The upside of that agonising first scene (and I’m sorry to keep harping on about it, but it was a bit like riding shotgun with Anthony Sowell for a little while there) is that the reader is painfully aware of what Samuel is doing while he goes about his normal sexual-predator-routine, without the author ever having to do anymore than drop a euphemism. It wasn’t until later in the book that I was able to appreciate the purpose of dropping such a detailed event so early on. Plus, the book does have a great opening line.

There are also some real situational gems. I wish I could relate them all, but they would be spoilers and in such a short piece it wouldn’t take much to ruin if for others. I’ll just say, for those who have read it, Samuel’s postcoital thoughts on his facial expression was my favourite. (There, I think that’s clear enough to identify and vague enough to not give anything away.)

I don’t know if this is the first of a series. There are certainly threads left open…Matt Cooper for one. But the story still has a complete feel to it. After a rough start…which, no doubt, was intended to be just so…I ended up really liking it. I liked the character’s internal dialogue, his attempt to find human closeness, his willingness to accept his own ugliness and welcome his eventual just rewards. I may have hated his actions, but I liked HIM. The thing is that they really shouldn’t be separable.