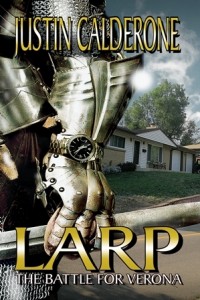 Author, Justin Caldrone, sent me an e-copy of his novel LARP: The Battle For Verona.

Description from Goodreads:
Dennis and his friends have been LARPing (Live Action Role Playing) since high school. Now, in his 20s, Dennis is seriously considering giving up LARPing for good. He’s tired of dealing with his overzealous friend Mark; he’s tired of his older brother Brad’s constant put-downs; and he’s tired of the fact that he doesn’t have a girlfriend. Check that. Not a girlfriend, but the girlfriend. Alyssa—the one woman he’s been pining over for years.

Dennis and his fellow LARPers have never been considered cool, in their small island community of Verona, located off the coast of Washington State.

While Dennis and his friends are attending a big LARP tournament on the mainland, a rogue terrorist group of Mongolians in medieval garb, led by an American madman, invade Verona and take its citizens hostage—including their families and friends.

When the LARPers find out what’s happening in their home-town, they do what any dedicated LARPer would do: they put on their armor, strap on their swords, and fight their way home—LARP-style!

Larp: The Battle For Verona is utterly ridiculous. 🙂 A small island off the coast of Washington State is occupied by an invading horde of medieval Mongols…riiighhhtt. Then a group of local Live Action Role Players ride in to save the day, not the US military, militia, or even the freakin’ Boy Scouts, but LARPers….Ooookaaay. But all of that is written on the back of the book, so you know going in exactly what you are going to get. This is the type of book you pick up because of the absurdity of the story, not in spite of it.

For me the whole point is being able to abandon myself to the unpredictable nature of the characters who find themselves in a completely unforeseeable circumstance. LARP doesn’t let you down in this regard. Dennis, Freddy, Mark, and Jen a good fun. As semi-professional twenty-somethings they each embody their time. Dennis is stuck. He can’t seem to find meaning in his mundane life. Freddy is struggling with an ethnic identity. Mark hasn’t quite managed to grow up and Jen is determined to find respect as a ferocious woman (as opposed to a pretty lady, or worse, Daddy’s Little Girl). These are characters you recognise from life. You see them day in and day out. Watching them each overcome their own uniquely modern problems has a certain gratifying feeling to it, as does seeing them concur the external problem.

I did find that the book repeated itself a lot and this got a little tiresome. It also felt like everything wrapped up a little too well. I’m all for a happy ending, but it all became so hunky-dory that it felt a bit like a veneer. This was only a small irritant on an otherwise really enjoyable read however.