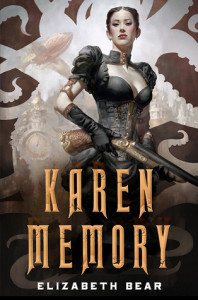 I picked up a copy of Karen Memory, by Elizabeth Bear at my local library (basically because I adored the cover).

Description from Goodreads:
“You ain’t gonna like what I have to tell you, but I’m gonna tell you anyway. See, my name is Karen Memery, like memory only spelt with an e, and I’m one of the girls what works in the Hôtel Mon Cherie on Amity Street. Hôtel has a little hat over the o like that. It’s French, so Beatrice tells me.”

Set in the late 19th century—when the city we now call Seattle Underground was the whole town (and still on the surface), when airships plied the trade routes, would-be gold miners were heading to the gold fields of Alaska, and steam-powered mechanicals stalked the waterfront, Karen is a young woman on her own, is making the best of her orphaned state by working in Madame Damnable’s high-quality bordello. Through Karen’s eyes we get to know the other girls in the house—a resourceful group—and the poor and the powerful of the town. Trouble erupts one night when a badly injured girl arrives at their door, begging sanctuary, followed by the man who holds her indenture, and who has a machine that can take over anyone’s mind and control their actions.  And as if that wasn’t bad enough, the next night brings a body dumped in their rubbish heap—a streetwalker who has been brutally murdered.

Bear brings alive this Jack-the-Ripper yarn of the old west with a light touch in Karen’s own memorable voice, and a mesmerizing evocation of classic steam-powered science.

Review:
This was a really quite enjoyable Wild West, Steampunk, Mystery Adventure. Yep, all those things. The narrator, Karen, has a very distinct, first person voice and I appreciated that the book even came around at the end and gave a reason for the first person narration. That’s balm to my soul that. It’s a pet peeve of mine to read first person POV and not know why I’m ‘being told the story.’

The book is also wonderfully diverse. There are characters of different races, nationalities, sexualities, and abilities. Several have prosthetic limbs, one blithely keeps a ‘pecker’ under her dress and several, despite being sorely uneducated, are still quite clever. It’s a quite endearing mix. I enjoyed this aspect of the book quite a lot. Probably just as much as I adored the fact that this is sewing machine mecha (just stop and imagine that for a moment) and that there are men and women working together without any underlying sexual tension. How rare is that?

However, I found the book quite slow. Plenty of action happens, but Karen’s narrative style means that it is all just sort of relayed to the reader in a somewhat flat manner. It mutes some of the effect, I think. Don’t get me wrong, I loved the way that same narrative tone highlighted her pragmatism about her profession and position. So, this was a bit of a double-edged sword. But it did mean there where times I found picking the book back up a bit of a chore.

Additionally, there are more than a few convenient coincidences that allow the plot to progress. Like meeting an airship pilot just hours before the characters suddenly had need of an airship. It felt contrived.