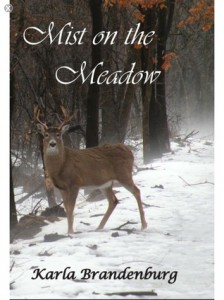 I grabbed Karla Brandenburg‘s Mist on the Meadow from the KDP free list.

Description from Goodreads:
For her twenty-fifth birthday, a family legacy is passed on to small town pastry chef Marissa Maitland as a Kundigerin, which means she has come into secret psychic power. She will know things about people at the brush of a hand, and use this to help them—but she cannot talk about being Kundigerin without suffering pain.

Named executor of his grandmother’s estate, Wolf Harper must find something called a “Kundigerin” before he can sell the place. If he could sell his remaining family too, he would. Keeping the family business afloat is his priority, in spite of his uncle’s bad management putting them in the red.

Wolf runs into Marissa—literally, at an icy intersection—and is enchanted by her beauty. One bite of her baked goods bewitches him and enflames a passion Marissa shares. But Marissa blurts long-buried details about the car accident that killed his parents, and knows far too much about the problems at Harper Electronics, neither of which she will explain. Should he be afraid of her?

Review:
This was a pretty good read. I really liked some aspects of it–Marissa’s family & friends, her work ethic, Wolf’s self-inforced control issues, the writing. I especially liked the way Wolf’s slightly crazed, desperate behaviour countered the traditional masculine role without making him feel wimpy and the fact that Chuck may not have gotten his comeuppance, but he didn’t get off scott-free either if you look at the karma of his life. However some things irked me.

Brandenburg doesn’t seem to be bound by her own rules. One of the first things Marissa learns about being a Kundigerin is that she isn’t allowed to talk about it. However, throughout the book she seems to speak fairly freely about it. Granted she avoids the actual word, but she still reveals herself on more than one occasion. Additionally, it is quite explicitly explained that females are Kundigerin and males are Secret Keepers, but Wolf seems to have Kundigerin powers of his own. Plus, since Marissa doesn’t seem to know much about her abilities the reader doesn’t know much and as a direct consequence there were times (the final confrontation for example) where I only had a hazy understanding of what actually happened.

A more personalised dislike was the fact that I thought that the whole misunderstanding with the ex-girlfriend was pat and trite. I could have done without all of the resulting self-doubt. She knew how he felt about her, so why feel so insecure? And lastly, After the mystery wrapped up (a little too nicely if you ask me) and everyone who deserved saving was saved there were still several chapters of just plain mush. No romantic trope was missed. Wolf systematically worked through every ‘awww’ moment possible. So much for everything in moderation.

Having laid my irritants on the table, let me reiterate that I enjoyed the read despite them. Brandenburg is a talented writer who sculpts believable characters that readers can easily relate to. I think the plot escaped the bounds of the story a little bit, but there is still a gem in here that is worth looking at.

On a side note, though it makes sense in the context of the book, the cover doesn’t do the book justice. Overlook it and give it a try.