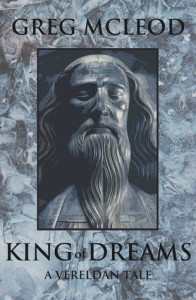 Author, Greg McLeod sent me an ecopy of his novel King of Dreams: A Vereldan Tale.

Description from Goodreads:
Everybody’s on the run: Laurin the dwarf, sent on an improbable errand by a dead king, ends up with an assassin on his tail. Bryn of Bailon, heir to a dark and troubling secret, discovers there’s no escaping the impossible burden that’s about to be placed on his shoulders. And Rhea Redbreast, apprentice Headhunter, makes it onto her own guild’s hit-list when she seeks justice for her parents’ killers.

But the real trouble is just beginning: shipwrecked on the frozen shores of the Ice Wastes, eternal victim Nudd Wiggin stumbles onto an ancient weapon and is turned into something more – and less – than human. As the cruel and devious King of Dunmark unleashes a war that quickly spreads to the neighboring kingdoms, a weaponized Nudd raises terror after terror, driving an immense wave of desperate, battle-hardened Nordsmen south towards the war-torn kingdoms’ borders.

Review:
I’m undecided about how to review this book. It’s an interesting story, with fine writing and engaging characters, but I find I didn’t particularly like it all that much. This book finally confirmed for me something I’ve been suspicious of for a while. I’m just not a fan of books that follow several character arcs that eventually come together toward the end.

They do all come together eventually, but following so many different people, in different places, facing different challenges (that you take on faith will be relevant) diluted my interest for any single pairing or plot arc. I often found myself following one and forgetting the others, then jarred when we changed. Only to then vaguely forget the others once more, for a while, only to again later be jarred by a transition. It was all deftly done (or as deftly as that many groupings will allow) but I’m just not a fan.

But I also think the book in general tried to spread itself too thin. There were two completely different and interesting things going on in the plot. There was the Big Bad, end of the world sort of thing. Then there is the smaller, heir to a kingdom, violence of Man sort of thing. The problem is that either one of them was enough on its own. What’s more, having them both in one book did two problematic things.

One, it spent more time on the small-scale human war than on the big-scale, danger to the whole human race aspect; which made the matter of one country’s heir to the throne seem more important than preventing the end of the world as we know it. In fact, no one even really knew about the big danger.

Two, both plot-lines distracted and detracted from the other. I would much rather have just read about Bryn, the Dwarf, Rhea, Bowen et al. and their fight for survival on its own. Then separately read a book about Nubb’s encounter with the Scour and The Snowpeople and Iceling’s fight to defeat it. Both are interesting, but both deserved their own book, in my opinion.

Again, the characters are mostly engaging. The writing was perfectly readable. The world-building is adequate for the story. It’s a fine book in that sense. I did think it needed another edit, especially toward the end. I noticed very few errors for the first 3/4 of the book, but in the last quarter whole sentences (and at one point a paragraph) are occasionally repeated.

All-in-all, a book that I think the right person would love. Given a more attractive cover, I think it could pull in plenty of readers and keep them happy.