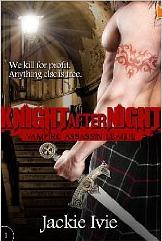 I downloaded a copy of Jackie Ivie‘s Knight After Night from Amazon. It’s a perma-freebie.

Description from goodreads:
THE VAMPIRE
Highland Vampire Thoran MacKettryck’s lonely. Bitter. Vengeful. For centuries now, he’s taken lives for profit and drained blood for free. Just like always. But then he’s gifted what every immortal craves: his mate. He just can’t believe his eyes when he finally hunts her down.

HIS MATE
Jolie Pritchard’s young. Studious. Driven. Studying Medieval Literature is her life and this scholarship – her dream. She’s the last thing an arrogant, gorgeous, world-class playboy should be pursuing and she knows it. If only he wasn’t the most thrilling male she’s ever imagined…

THE CURSE
She was warned. She didn’t listen.

Review:
Man, what a waste! Ivie can write. There’s witty dialogue. There’s a cute, kind of clueless alpha male who begs. (I love me some begging man.) There’s smart female lead. There’s vampires. Really, this should have been a slam dunk for me. But no. No. No. No. NO. NO!

It’s not even half as long as it needs to be to allow for a believable plot. So it’s incredibly rushed and almost every aspect of it is underdeveloped. Thornan is apparently some sort of vampire assassin (the series is even called Vampire Assassin League) but that’s not addressed anywhere in the book.

Jolie is unnecessarily rude to Thornan from the moment they meet. Really, people usually present a little social grace when confronted with new people before turning mean. He bullies her into a date by threatening violence against anyone she tries to call for help and ignores all her attempts at agency. Then, despite the author trying to show Jolie angry at the idea of being materialistic, a full on third of the book seems to be dedicated to describing his wealth and Jolie’s response to it.

There is slut shaming and the requisite naive virgin whining about how his big penis will tear her. WTF? Jolie just accepts everything with ease by deciding not to think about it (what happened to the smart girl in the beginning) and seems to have some sort of personality transplant about halfway through the book. Then they declare ever-lasting love after one night together.

I am so disappointed!