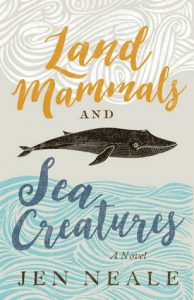 I won a copy of Land Mammals and Sea Creatures, by Jen Neale through Goodreads.

Description:
Almost immediately upon Julie Bird’s return to the small port town where she was raised, everyday life is turned upside down. Julie’s Gulf War vet father, Marty, has been on the losing side of a battle with PTSD for too long. A day of boating takes a dramatic turn when a majestic blue whale beaches itself and dies. A blond stranger sets up camp oceanside: she’s an agitator, musician-impersonator, and armchair philosopher named Jennie Lee Lewis — and Julie discovers she’s connected to her father’s mysterious trip to New Mexico 25 years earlier. As the blue whale decays on the beach, more wildlife turns up dead — apparently by suicide — echoing Marty’s deepest desire. But Julie isn’t ready for a world without her father.

Review:
Do you have a book club? Does it like to read those kind of obscure books that put metaphors and symbolism over…say, making sense and calls itself meaningful? Yea, that’s Land Mammals and Sea Creatures. I can see some literary book clubs that appreciate teasing out nuances liking this.

Me? I really just wanted to know what was happening with the animals and why no one seemed to investigate it, why JJL was so all knowing as a child and then as an adult, what was happening at the shows, and why no one ever tried get Marty into therapy if he’d been suicidal for almost 30 years. I actually really like Magical Realism, but I’m not willing to let it explain away everything. I still want answers in of some sort in the end.

I thought the writing was pretty. I love the cover. I liked some of the characters, especially Alan (the probably gay friend of Marty who’d spent Julie’s whole life stepping up to father on the side). But overall this book was a bust for me.