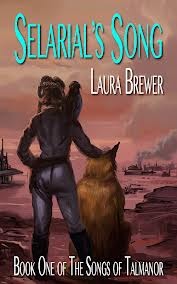 I grabbed Laura Brewer‘s Sci-Fi novel Selarial’s Song (The Songs of Talmanor, #1) off of the KDP free list a few months back.

Long description from Goodreads:
Selarial, a Singer of notable telepathic ability, is Chief Engineer aboard the Equinox. Few outside the other Sorthians aboard her ship are aware she is also the daughter of Sorth’s Ambassador. She, like all Singers, is mind bonded with two of Sorth’s other sentient species; Kirrlea, a sisha (feline) and Roth, a lidan (raptor). Both are known for their independence, loyalty and ferocity in a fight. As strange as it appears to outsiders, both Singers and sisha are often skilled healers as well as fighters.

Alcar Trent is Captain of the Ventura and native of Tarrel, another of the Founding Worlds. His only home has been his ship for two decades. He is uncertain of the talents of the Sorthians on the Equinox, but regards them as strong allies that he trusts to watch ones back in a fight. Not all of his crew agree with that. However, he comes to rely on Selarial’s abilities and to discover some of his own.

When Selarial and Alcar’s ships are assigned to border patrol together, they know it is likely to get rough. It had been eight hundred years since the war with the Thess’n Empire. The Coalition’s relations with their old enemy had always been strained, but now the Thess’ns are raiding again. The Coalition forces on the border know war is on the verge of breaking out again, but most of the leadership is too concerned with political maneuvering to take the threat seriously. The notable exceptions are the worlds that founded the Coalition, including Sorth and Tarrel.

As incidents increase, Selarial and Alcar begin to see that Sorthians are high on the list of targets. Selarial also appears to acquire the personal enmity of one of the Thess’n Warlords. When ancient weapons, long thought destroyed, begin to appear in the hands of their enemies, Selarial wants to know why. On Sorth, the Singer Council delves into ancient records for answers, but uncovers more questions and an urgent warning.

I really enjoyed this book in a mellow sort of way. I like the story and the characters a lot, but it  moves fairly slowly. This encourages the reader (or at least me as a reader) to slow down too. Brewer spends a lot of time describing history and/or the use of one’s psychic skills. This is interesting but slows the action down. It also makes the book feel like it is probably part of a much bigger story. Otherwise the story couldn’t afford to dedicate so much time to non-events IMO. What the book lacks in heart-racing, page turning action it makes up in carefully considered spiritual awareness though. The Sorthians are a model of what humans should and could aspire to. Well maybe not the whole psychic linking part (though that would be pretty awesome), but certainly the environmentally, socially and spiritually cognizant part.

I have to admit that Alcar and Selarial’s bonding did smack a little bit of the insta-love that is so frequent in YA books. It always irks me and here is no exception. I would have liked them to have gotten to know each other a little bit. I get that there is probably supposed to be a certain amount of providence or divine intercession going on, but that feels like a necessary assumption that I would rather not have to make. Either way I enjoyed the book enough to race right back to Amazon and buy the second (Dream Song).

On a more personal note, I discovered from Brewer’s Twitter page that she is from (or at least in) Monteagle, Tn. This  is pretty close to my home turf. I was born in Alto, which is just down the mountain. This will mean next to nothing to most people, since both Alto and Monteagle are  pretty small towns. But it gave me a small personal thrill. As a result, while I would never be so arrogant as to presume to know any author’s inspiration, I have completely re-visualized The Vales on Sorth as Roark’s Cove. I just can’t help it. The Cove is one of my favourite places on earth and I think it is every bit as beautiful as the Singer’s haven is said to be.