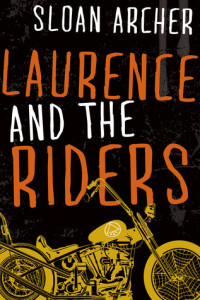 Sloan Archer sent me an ecopy of Laurence and the Riders in exchange for an honest review. However, I believe it has since been retitles The Last Days of Ordinary.

Description from Goodreads:
When Laurence Clarke reunites with his beautiful high school crush, he never anticipates that his ordinary world will forever change. Jolene Mason has been keeping many secrets since they were teenagers, but the one Laurence never would have imagined is also the most dangerous: Jolene’s father is a leader of Paxios, an underground race of immortals with a penchant for illicit gold dust and human organs. This wouldn’t matter so much to Laurence if he hadn’t witnessed Jolene’s father commit murder. Now he’s stuck working for criminals in exchange for safety, forbidden to see Jolene on top of everything else. But Laurence doesn’t always do what he’s told, and soon finds himself in over his head, longing for the days when life was simple. . .

Review:
This was an amusing read. It had some truly funny bits and the general idea of the plot is an interesting one. I like Laurence and could appreciate the difficulty of his position. I liked Boone and could relate to Spider and Laurence’s odd friendship.

Unfortunately, I also felt no chemistry between Laurence and Jolene, mostly because the amount of time Laurence spent with her was dwarf by what he spent with Spider and the Enders. Similarly, Laurence was meant to have a strong bond with his brother, but you never saw it. They almost never spoke to one another.

The writing itself is pretty strong. I did think some parts of the book bordered on cheesy; like the info-drop about the Paxios…cheesy. I also had a problem with weapons of pure gold. Gold is very soft. How strong could a dagger or, God forbid, a bullet of pure gold be?

On the whole, though, I like more than I didn’t and enjoyed the read.