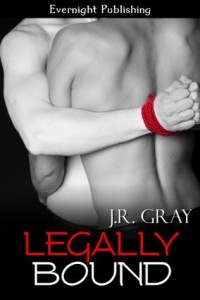 I bought a copy of Legally Bound, by J. R. Gray, from Amazon.

Description from Goodreads:
The last thing Daniel, a hard-working public defender, expected to see the morning after a one night stand was his hook-up staring back at him from the wrong side of the law. Assigned to work his case, Daniel vows to keep things professional with Rafael but has a hard time controlling his craving for dominance, the control, and the connection they shared. Rafael, a paid Dominant in the Chicago underworld, has been dealing with a cop problem for far too long. Used to sex with no emotion, he’s entranced with Daniel’s submission, his innocence, and…could there be something more? Can Daniel clear Rafael’s name, keeping him out of jail and in his life, with the odds, a cop, and the mounting evidence against them?

Review:
This was one of those books that I both loved and grit my teeth about. I really liked the characters (especially the side characters). I Really appreciated the vulnerable Dom and the way the characters were more than their titles. Doms still knelt in front of others, subs had backbones and demands. I liked that Gray wasn’t ridged in their categorizing of people. I liked the writing and enjoyed the book for the most part.

But…but there are some too stupid to be believed moments in the book. Sure, they moved the plot along and the characters found ways to incorporate them and make the best of the mess, but I could not believe they were oblivious and unaware enough to do them. I did not appreciate the representation of the harpy wife and the constant degradation tossed her way. Yes, I understood Jesse was supposed to have, at least partially and unconsciously, helped to sculpt that relationship, but it jut felt very anti-woman to me, even if it wasn’t meant to. (And this is just so regrettably common in M/M romances on the whole.) And lastly, I thought there was a bit too much sex.

So, this is a middle of the road read for me. But I’d read the next one if it fell in my lap, so it’s not a fail by a long shot.